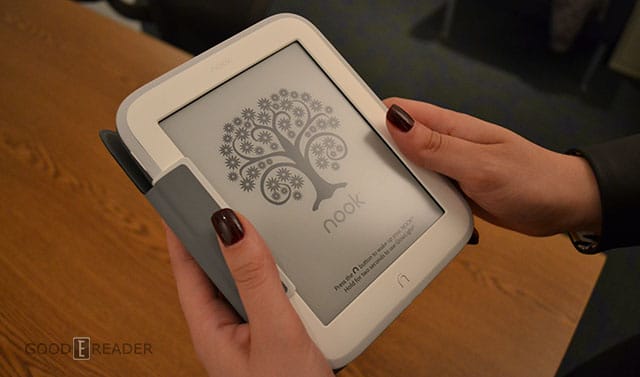 Barnes and Noble has just released their fiscal results for the past quarter, but also for 2015. The bookseller reported that NOOK sales, which include digital content, devices and accessories, were $42.0 million for the quarter and $191.5 million for the full year, decreasing 20.0% and 27.4%, respectively, due primarily to lower device and content sales.

Barnes and Noble is hoping that the Nook loses will continue to decrease in 2016. The company shuttered their Nook Video and Nook App Store and closed down their Nook Digital Bookstore in the United Kingdom. They also outsourced firmware updates and software design to India. This should save the company around $10 to $12 million dollars in fiscal 2016.

NOOK sales, which include digital content, devices and accessories, were $42.0 million for the quarter and $191.5 million for the full year, decreasing 20.0% and 27.4%, respectively, due primarily to lower device and content sales.

Consolidated sales were $877 million for the quarter and $4.16 billion for the year, decreasing 3.7% and 3.1%, respectively, as compared to the prior year.

For the fourth quarter, Retail incurred an EBITDA loss of $11.1 million, which includes a previously disclosed $20.9 million pension settlement charge related to the termination of the Company’s pension plan.  Excluding this charge, Retail EBITDA would have been $9.8 million during the quarter, a decline of $23.3 million versus the prior year, primarily on lower sales, increased promotional activity and higher store wages and benefit costs.

For the full year, Retail generated EBITDA of $215.2 million, inclusive of $35.2 million of charges, including the $20.9 million pension charge noted above, a $10.5 million executive severance charge related to the Barnes & Noble College spin-off and a $3.8 million publishing contract impairment.  Excluding these charges, Retail EBITDA would have been $250.4 million for the year, declining $67.3 million primarily on lower sales, increased advertising, higher store wages and expense deleverage.

Fourth quarter NOOK EBITDA losses were $14.9 million, which included approximately $4.0 million of expenses incurred to further rationalize the cost structure of the business.  These expenses include transitional costs to outsource certain technology functions, consulting fees, Retail integration costs, and expenses to exit the U.K., apps and video businesses.  Excluding these items, NOOK EBITDA losses would have been consistent with the third quarter.

Full year NOOK EBITDA losses were $64.7 million this year as compared to $83.9 million a year ago, a 23% decrease as the Company continues to focus on cost rationalization efforts.

Outlook
“As we look ahead to fiscal 2017 and beyond, we are focusing on executing a number of initiatives to grow bookstore and online sales, reduce Retail and NOOK expenses and grow our Membership base,” said Ron Boire, Chief Executive Officer of Barnes & Noble, Inc.  “We believe our marketing, merchandising and Membership initiatives will lead to increased traffic and conversion in our stores.  We are also excited about our plans to open four new concept stores opening later this year, beginning with the first store opening this October in Eastchester, NY.  We look forward to discussing these initiatives at our Investor Day.”

Investor Day Webcast
The Company’s senior management will host an investor conference beginning at
9:00 A.M. ET on Thursday, June 23, 2016 to discuss the Company’s financial results, business strategy and longer-term outlook. The webcast of this investor conference can be accessed on Barnes & Noble, Inc.’s corporate website at www.barnesandnobleinc.com/webcasts.

Financial Tables
Download financial tables related to the sales and earnings for the fiscal 2016 fourth quarter and full-year ended April 30, 2016: