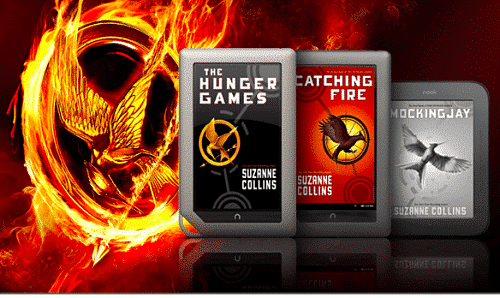 Barnes and Noble is running a promotional campaign at 26 of their largest stores to give customers free tickets to the upcoming Hunger Games Movie. The company is betting that many people will purchase the the entire trilogy before watching the film.

Suzanne Collins highly anticipated first movie is the first of a trilogy and many young adults are looking forward to it. I have seen many people in the last few weeks cradling the books in their arms in preparation for the movies, so bookstores are selling many copies these days. Speaking of higher sales for the trilogy, the company is giving the 1st book away in the trilogy for free if you buy an e-reader.

So which e-readers are eligible for this promotion? All of them! The Nook Simple Touch, Nook Tablet, and Nook Color will all get you some free tickets to the early screening in LA and New York March 19th. Only stores in those two States are actively participating in this promotion, and the movies open in North America on the 23rd. Barnes and Noble is also sweetening the deal by throwing in free access to its VIP Parties to anyone who buys an e-reader.