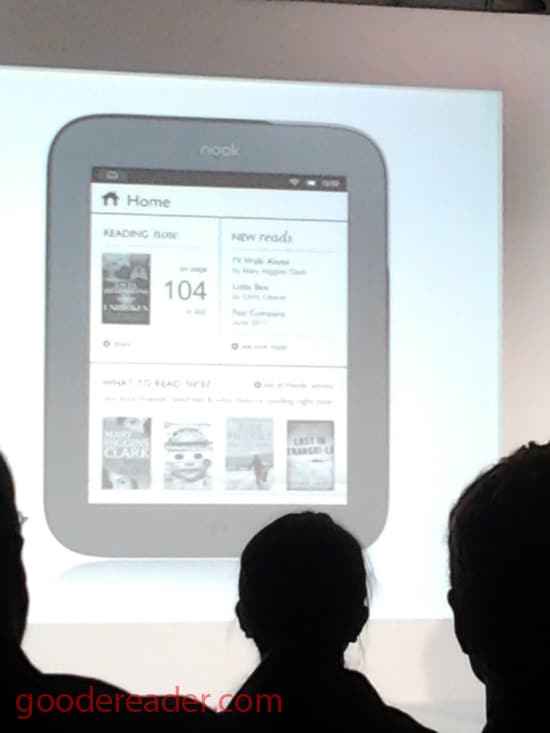 This morning in a Union Square store B&N press conference, the team behind the Nook introduced their latest market-changing product in a bookstore-turned-techno-rave. Dozens of B&N employees lined the walls, serving as bouncers/product demo specialists, while New York city policeman provided in-store security.

Barnes and Noble CEO William Lynch took the stage today and proclaimed that the company owns 25% of the ebook market and leads the Android Tablet Market via the Nook Color. He also added that they innovated the entire eBook lending market with the “lendme” feature which allows users to share ebooks with each other. William then brandished the very sleek Barnes and Noble Nook 2 and played a slick hype video going over the main features.

The Barnes and Noble Nook 2 is being billed as the simplest e-reader ever created! It features a full touchscreen 6 inch PEARL display with a resolution of 800×600 pixels and 16 levels of gray scale. The screen looks very good and is said to have 50% better contrast then the original Nook 3G and WFI. This new e-reader is blazing fast with the 800Mhz processor it has underneath the hood. It is running on the Google Android 2.1 OS, but no word yet if there are applications available to download or if Barnes and Noble will have an app store.  It has a very a cool virtual keyboard that allows you to type notes, letters or emails. It has 2 GB of internal storage to hold your books and media content and you can further expand it via Micro SD up to 32 GB. The new unit has built in WIFI to access the internet and you can connect up free in any AT&T Hotspot or in any Barnes and Noble Store. Physically the unit only has 1 button, which is 37 fewer than the Kindle, the CEO Joked.

This new model is 35% lighter and 15% thinner then previous Nook iterations. One of the most exciting features is that it is said to have 80% less refresh rate when you turn the pages, so you get less of the `flashing`effect. Battery life was said to last almost 2 full months on a charge.

The new Nook 2 has a feature called `Nook Friends`that allows you to share recommendations for books and also send those books you dig to Facebook and Twitter. They also have developed a new website called `mynook.com`giving customers a new and unique experience to buy and download ebooks online.

Nook 2 owners will be able to subscribe to newspapers, magazines and buy over 2.2 million ebooks in the Barnes and Noble online catalog. You will also have access to PUBIT books, which are submitted by independent authors. Speaking of the eBook experience you have different fonts and font sizes you can use on he Nook 2. Currently it has 6 different fonts and 7 different sizes.  For ebook formats you will still be able to deal mainly with ePub and PDF formats and if you have purchased books from Barnes and Noble with a prior e-reader like the WIFI or 3G, your books are accessible on the Nook 2.

Now there is some news that may not sit well with some people. There is no dedicated internet browser, so you cannot surf the net, whether they will allow you to do this in the future is unknown. It also does not have support for audio, such as Audio Books or Mp3 music files.  On the flip side since the Nook 2 is running Google Android 2.1 as the operating system. It will only be a matter of time before hackers ‘root’ the device and add web browsing and dare I say “Angry Birds” in e-ink?