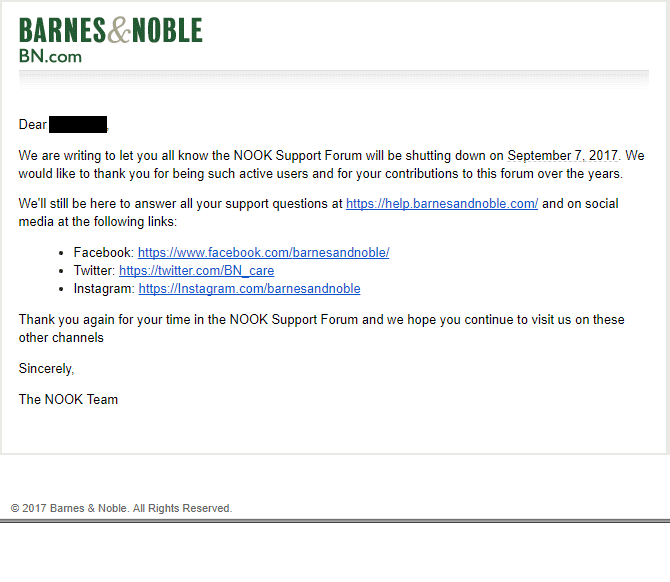 Barnes and Noble is going to be shutting down their Nook support forums on September 7th. The bookseller has disclosed that they no longer want to allocate internal tech support to solve common ereader and tablet problems. Instead of having a dedicated space for users to conglomerate, Barnes and Noble is encouraging them to follow them on Twitter and Facebook to ask for help.

The Nook Support forums have been going strong for the past three years. There are thousands of discussions ranging from proclamations of love for their Nook to general tech support. Barnes and Noble staff were not directly helping users on a day to day basis. The vast majority of troubleshooting and tutorial related discussions were primarily handled by the users.

The Barnes and Noble support forums fostered a community around the Nook line of tablets and e-readers. Following the bookseller on Facebook or Twitter does not provide the same level of engagement. Trying to get a hold of them on the phone is an exercise in patience and good luck finding out the answers to any tech related questions calling their general support phone number.

Many users are obviously disgruntled that their online home has been unceremoniously dismantled. They are accusing Barnes and Noble of not being serious about the Nook anymore. They might be onto something. This summer B&N started to remove the Nook display stands from the front of the store, to the back of the store. You can no longer walk past a bookstore and see anything related to Nook from the window, you have to walk to very back of the store.