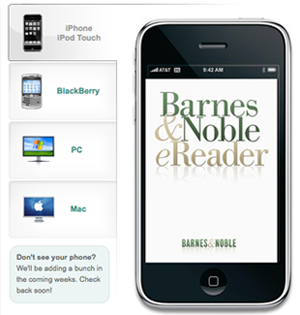 As per the latest e-reader news that we have, Barnes & Noble has revealed for the first time that they are in the process of developing an e-reader app for iPad. The e-reader app is going to be compatible with its own e-reader, the Nook and will be ready by the time Apple begins shipping its iPad, which is on the 3rd of April in US. Canadian will have to wait a bit longer though, till 24th April when iPad begins to appear on their soil.

Needless to say, the Barnes & Noble eBookstore will be fully compatible with this e-book reader app that they are creating while also supporting all content that Nook users have downloaded in their e-readers.

As for the iPad, it is Apple’s latest offering the tablet PC segment and among the many things that this ‘wonder’ device is capable of doing is taking up the role of an e-reader. Apple also has its own iBookstore, which is Apple’s own iTunes Store from where you can source e-books, newspapers and magazines.

Barnes & Noble is the first to go off the block in coming up with an e-reader app for the iPad and this might just be the beginning of a new trend, that of competing e-book stores joining in to develop their own e-reader apps for the iPad, particularly in view of Apple’s plans to sell e-books for the iPad. There has been some speculation if such a thing is going to happen. But now that Barnes & Noble has announced that they are into it, we know for sure it’s going to happen.

You will have more such exciting coverage in our upcoming Good E-Reader Magazine which is slated for an April release.