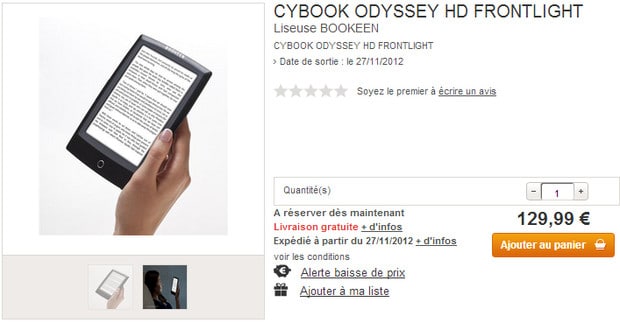 Many companies are starting to adopt the same frontlight technology found in the Amazon Kindle Paperwhite and Kobo Glo. Bookeen announced its own e-reader today to appeal to sensible European customers with the new Cybook Odyssey HD.

Bookeen is betting on the ability that reading your ebooks in the dark is going to remain popular, and will move its product portfolio in a positive direction. The new device will offer the 1024×758 resolution with 213 DPI. You will be able to expand the memory up to 32 GB via the Micro SD and garner around 2 GB of internal memory. With this version, Bookeen introduces a PDF reflow option to the Cybook Odyssey. For PDF users, this new software feature makes reading as easy as possible. This is a key element in order to read the content in a better layout without having to manipulate the display. It will also have WIFI to surf the internet and purchase books. It will hit the market this November for 129 € at Cultura, Thalia, and at Virgin.

Only the Kobo Glo is currently available in Europe and it should be awhile before it hits the general European market. Bookeen seeks to capitalize on the consumer awareness of glowing e-readers by offering its own device. It should do well, due to the company’s established relationships with a growing number of retailers.