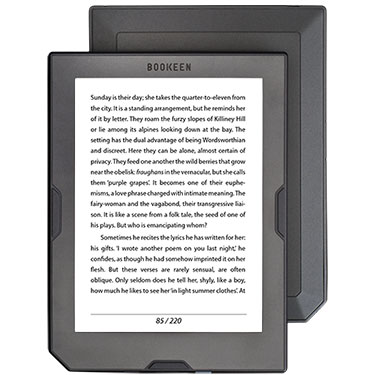 Bookeen has just announced a new high resolution e-reader that is going to be available later this week for 129,90€. It is a well designed e-reader that has inertial scrolling, so it functions much like a smartphone or tablet.

The Cybook Muse HD features an e-ink Carta display with a resolution of 1448 x 1072 with 300 PPI. The built in frontLight will allow you to read in the dark and it has 20 different levels of intensity. Underneath the hood is a Cortex A8 1GHz processor and 8 GB of internal memory. If this is not enough, you can expand it further via the SD Card.

This device has the same resolution as most other mainstream e-readers on the market. The reading experience should be more solid than most indie brands because Bookeen is using Caecilia as the default reading font. This is the same one that Amazon had used for many years before they switched to their own fonts that they built in-house.

The Bookeen team reduced the e-reader size by 17% in comparison to its predecessor, the Cybook Odyssey, while still providing 6 inches of reading page. The e-reader is also only 8mm thick and weighs only 180g.