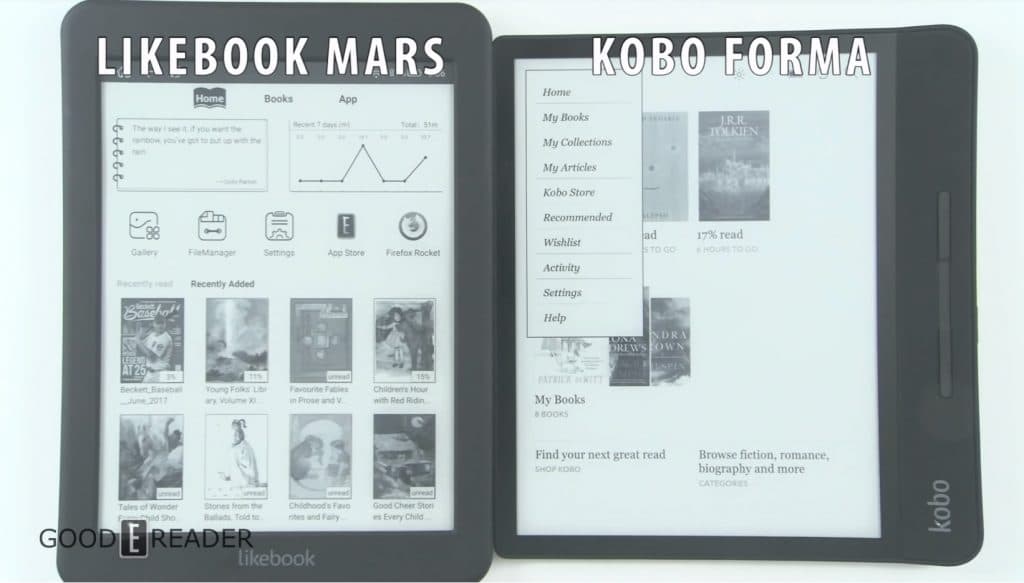 The Boyue Likebook Mars and Kobo Forma are two e-readers that have both been released in the past few weeks. They run vastly different operating systems and the hardware specs warrant your attention. If you are a serious reader, what device is ideal?

The Likebook Mars features a 7.8 inch  E Ink Carta touchscreen display with a resolution of 1782×1448 and 300 PPI.  Underneath the hood is a 8 core 1.5 GHZ processor with 2GB of RAM and 16GB of internal storage. This is the first e-reader ever made with an octa-core processor. It also has support for Bluetooth, WIFi, 3.5mm headphone jack, but doesn’t have built in in speakers.

The Mars has a SD card, something many companies seem to be forgoing. Kobo no longer includes an SD card in any of their e-readers and ditto with the Kindle. Even Onyx Boox has decided to not include expandable storage to any  of their higher priced Note e-readers. Mars supports a 128GB SD Card or anywhere in between.  It also has Android 6.0 and Google Play to access a myriad of apps.

The Kobo Forma features an 8 inch display that uses E Ink Mobius and Carta HD and has a resolution of 1440 × 1920 and 300 PPI. It is powered by a Freescale IMX6 Solo Lite 1GHZ processor and 512MB of RAM. The 8GB storage model will be the most accessible, there is a 32GB version, but it will only launch in Japan, for now. The Forma also does not have an SD card.  Kobo employs Linux on their e-readers, which is more stable than Android.

Both of these devices have a color temperature system and a front-lit display. They both have 17 LED lights with a mixture of white and red. The intention behind this new display is to help mute the bright white screen into various degrees of orange.

One of the advantages of the Kobo e-reader is that it has a gyroscope and manual page turn keys. It also has Overdrive functionality built into the firmware, so the entire experience is very robust. The Likebook has amazing hardware, but the Android experience is buggy.