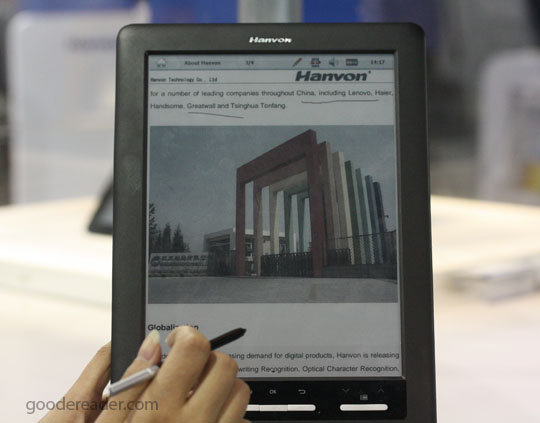 We are all used to the e-ink display screens found in the Amazon Kindle, Barnes and Noble Nook and Kobo Touch. Mainly you will find e-ink Pearl technology within those readers but a giant is looming in the wings with e-Ink Triton. This is color e-ink technology as featured in the Hanvon e-reader shown as CES earlier in the year and re-branded by Ectaco as the Jetbook Color. This technology just won the coveted Wall Street Journal 2011 innovation award.

Ectaco released the following statement about winning the award; “While working on the jetBook Color development team, we were sure that the potential of this revolutionary device was going to be immense. Now, our belief has been proven by the Wall Street Journal. The E Ink Triton display in the ECTACO jetBook Color that uses the first and only color e-ink technology in the world has been presented with the 2011 Innovation Award.”

“Our E Ink Triton displays will enable the use of electrophoretic displays for publishing applications that require color charts, graphics and images such as textbooks and magazines,” said Sriram Peruvemba, Chief Marketing Officer at E Ink. “Recognition for this innovation from the Wall Street Journal is a testament to our Company’s efforts to bring electronic paper solutions to the market that close the gap between paper and electronic displays.”