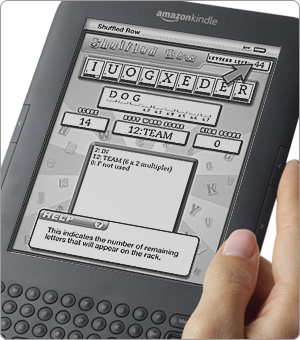 Using the SDK for the Kindle E-Reader, that were issued a few months ago to a select number of developers, we have seen upgrades in firmware with Facebook and Twitter. Now we have a pair of new Games to play on your Kindle called “Shuffled Row” and “Every Word”

Can you keep up with Shuffled Row? See how many words you can make from 60 lettered tiles.

The tiles are added to your row one at a time so you’ll constantly be working with a new set of letters. After you submit a word, the letters you used will be removed and new ones will be added. Increase your score by using less common letters. Create longer words and increase your score even more.

If you don’t use the letters fast enough, they’ll disappear and new ones will take their place, so you’ll have to decide if you want to play it safe and use short words or try to wait for more letters to form longer words.

If you like word scrambles then Every Word is the game for you. Test your vocabulary as you try to find as many words from the scrambled letters in this fun and fast-paced word game.

Here’s how it works. You are given six or seven scrambled letters with the goal of finding as many words as you can. You score points by filling out the words in each empty spot on the board using only the letters that appear at the top of the game board. Keep at it until time runs out or until you fill up the board. The more words you make, the higher your score!

Both of the applications are in different shades of Grey Scale via E-Ink. They do include some pretty interesting features like note-taking, highlighting and the ability to send clips and quotations to Facebook, Twitter and other social networks.

For the latest E-Reader news Subscribe to our Good E-Reader Magazine!