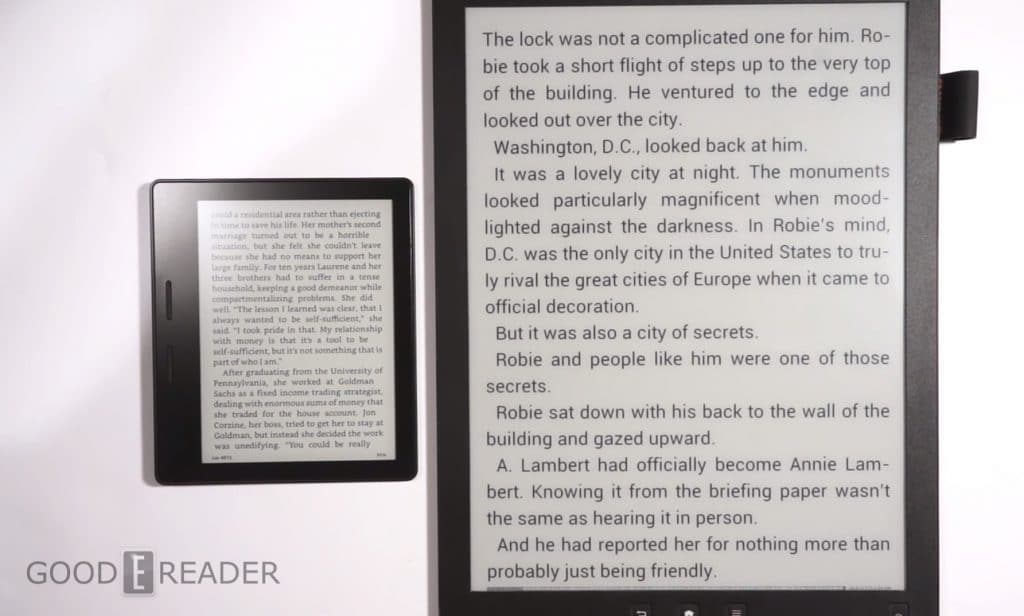 The Good e-Reader 13.3 is the first large screen e-reader that can take notes, run android apps and read e-books. Many people are wondering exactly how does our device stack up against the competition and today we would like to give you a comparison video between our 13.3 e-reader and the brand new Amazon Kindle Oasis.

The Good e-Reader 13.3 features a giant 13.3 inch touchscreen display with a resolution of 1600 x 1200. Our E-Ink Mobius screen can be interacted with either your fingers or the accompanied stylus.

Underneath the hood is a single core 1 GHZ process, 512 MB of RAM and 4 GB of internal memory. Unlike the Oasis, you can expand our reader up to 32 GB via the MicroSD card.

The Amazon Kindle Oasis features a six inch capacitive touchscreen display with a resolution of 1440 X 1080 and 300 PPI. The e-paper panel is utilizing e-Ink Carta HD and the screen is completely flush the bezel.

What makes the Oasis standout compared to previous Kindle models is that it has a built in gyroscope. You can easily switch orientations by simply flipping the device over. There are two physical page turn buttons on the right hand side and they do not provide haptic support like the Voyage does. The page turn buttons provide a great amount of synergy with the gyroscope because it makes the Oasis compatible with people who are left handed. You can also read at night via the front-lit display with 10 LED lights.

In the video below we will give you a sense of the great things the Good e-Reader 13.3 is capable of doing and why it is so much better than the Kindle Oasis.