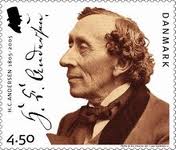 A historian in Denmark has found a previously unknown fairy tale by Andersen that is thought to be the first story he ever wrote. It was found in a box and was evidently written for a vicar’s widow, leading scholars to believe The Tallow Candle was written as a gift. According to the Melville House blog, Andersen’s works are second only to the Bible in their amount of translations. The story has been published by the Danish newspaper Politiken and it’s quite short.  Since the translation into English is copyrighted, I can’t reprint it, but you can find it here. The story is addressed “To Mme Bunkeflod from her devoted H.C. Andersen.”