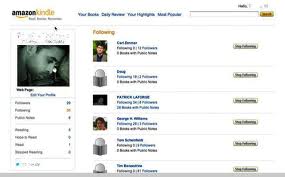 Earlier this year, Amazon.com launched its own social interactive reading platform, Public Notes. As the name readily implies, users can choose to follow other Public Notes users and see their highlighted passages and notes in the virtual margins for any book that users choose to make, well, public. The entire premise of social reading was conceived as a great worldwide web book club in which users who follow each other can comment on specific passages in the books they read and people can easily search for other users with similar literary tastes.

But as with all things social media, more connectivity was decided to equal more users relying on Public Notes for their social reading experience, a bigger-is-better approach. Once users linked their Twitter or Facebook accounts to their Public Notes accounts, their entire following or friend lists automatically became connected to their Public Notes friends. That wouldn’t really seem like a bad thing, to most users. However, the connectivity move was apparently made without prior information to those users who were currently signed up with Public Notes. Moreover, there is no automatic setting to enable users to not see someone’s notes.

Essentially, if two users are connected on Facebook, they are now connected on Public Notes unless they take steps to prevent it, without regard to their tastes in literature or their ability to string eight words together to make a coherent sentence, let alone to critique a book.

Admittedly, before Amazon forced the link between Facebook, Twitter, and Public Notes, it was difficult to weed through the plethora of Public Notes users to find likeminded readers with whom to connect. At the same time, how many different social networking sites can companies reasonably expect users to keep updating with the same names that have been in their Facebook friends’ lists for quite some time? Rather than cause readers to establish yet another social media fan base, Public Notes incorporated its users other accounts, like it or not. Apparently this was a little too Big Brother-ish for Barnes & Noble, who went to great lengths to stress to its customers that Nook Friends will not shanghai anyone’s friend list or followers.

The real issue of concern here may be privacy. On the surface, the gut reaction to this news might be, “Big deal, so the entire internet found out you read a book.” However, it would seem logical that there are books out there that readers don’t necessarily want their entire connected universe knowing they bought, read, and commented on, such as titles outside the mainstream in politics, religion, or sexuality, just to suggest a few. At this time Public Notes users have the option of not sharing their connections in their Twitter and Facebook accounts with Amazon, but users will need to correct the default setting of public sharing in order to keep their personal libraries hidden from the view of their contacts lists.