Icarus has developed a new eight inch e-reader that certainly stands out in a crowded market full of six inch devices. One of the big selling points is the open Android concept, that allows users to install their own apps. What is most compelling, is that this model has a 3.5mm headphone jack. This makes it possible to listen to audiobooks and music.

Icarus has really hyped up the slim design and claims its up to 20% lighter than competing devices. (145 x 200 x 9mm, 275gr.) They managed to pull this off because they decided to forgo manual page turn buttons and instead relies exclusively on the touchscreen display. There are only two buttons on the device: on/off and the home button.

The lack of page turn buttons are actually a blessing in disguise. Normally with open Android e-readers, only the stock e-reading app can normally can take advantage of it. Kindle, Kobo, Nook and everything else is totally incompatible.

Icarus is one of the few companies in the world that still directly support audio on e-readers. You can easily download popular apps like Audible, Soundcloud or Spotify. You need to plug in headphones or external speakers that have a 3.5mm input. The XL does not have Bluetooth, so this will prevent you from using modern speakers or something like the Beats Pill.

The XL has a front-lit display, which allows you to read in the dark. If you have the brightness cranked to the max there is a little bit of light spillage on the top and bottom of the screen. The light is not as uniform as the Kindle Paperwhite or the Kindle Voyage.

Overall, the Icarus is designed well. I wish the screen was flush with the bezel and that they used better resolution. E-Ink Pearl HD is very old, and there is better alternatives such as Fina and Mobius. 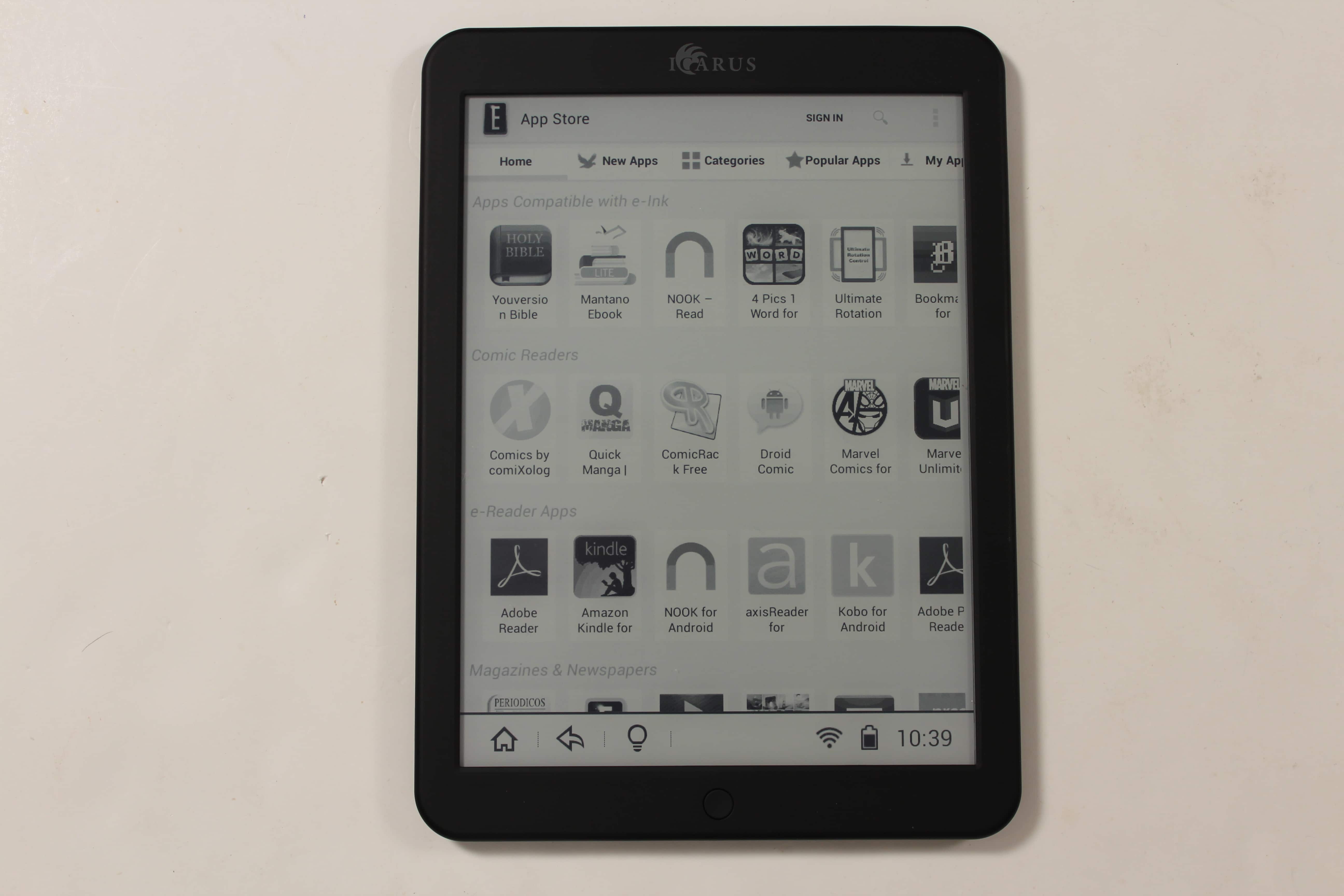 The Icarus XL is running Google Android 4.2.2 which is fairly standard for most e-readers. There is no compelling reason to offer any of the more modern iterations because of the limitations of e-Ink.

If you have purchased an Icarus e-reader in the past, you should be well familiar with the UI. For those of you who are new, basically you have your library, file manager, apps and the settings menu. The book catalog functions like a file explorer manager. You have to dive into sub-menus to access directories, which house your collection. There are around 100 e-books in various languages that come bundled with the e-reader.

Navigating around the XL is snappy, you seldom will run into any processes that take a long time to load. Its fairly basic.

The Icarus XL has a customized version of the Good e-Reader App Store, that is designed exclusively for e-ink devices. This is your online destination to access  manga, magazines, newspapers, RSS Readers and alternative Android e-reading apps. FBReader, Cool Reader and Moon+ Reader are likely the apps you want to install first. If you like to borrow e-books from the library, you can easily install the Overdrive app.

Obviously with an open Android system, you can install any app market you want, including Amazon  Underground or 1mobile. 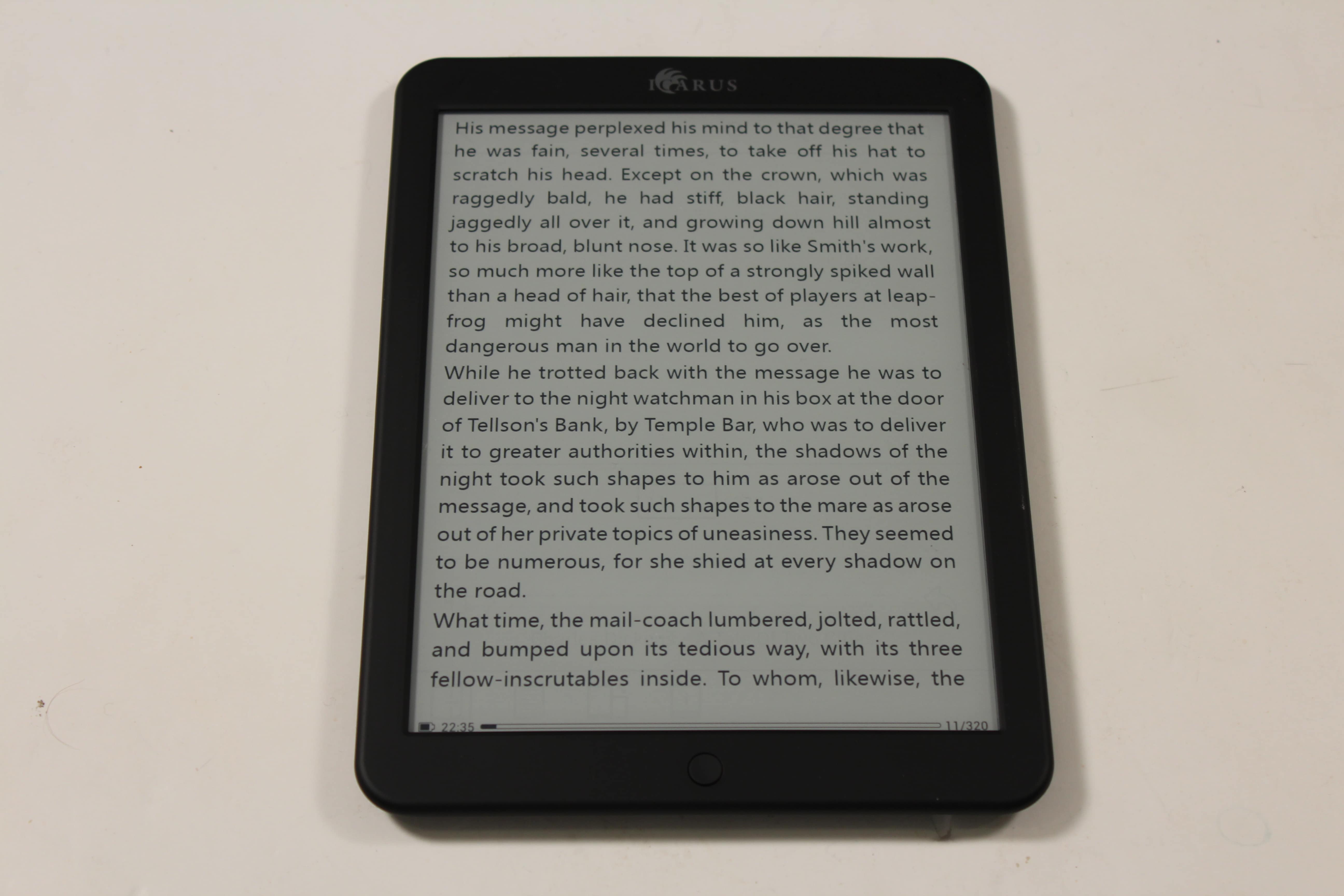 The Icarus XL is somewhat appealing to the hardcore e-reader audience, the type of people that have owned many devices in the past and troll popular forums like Mobileread. It offers a ton of flexibility to craft your own experience, by installing your own dictionaries, keyboards and apps.

This device is not very accessible to people who are brand new to e-readers. First of all, if you rely on the stock reading app, the e-book experience is terrible. There is over 6 pages of fonts and most of the navigation is not intuitive. For example, do you want to increase the line spacing by 0.5 or 3.0? Who knows!? I also hate the directory structure. I like simple and elegant, not everything buried in bunch of sub-menus.