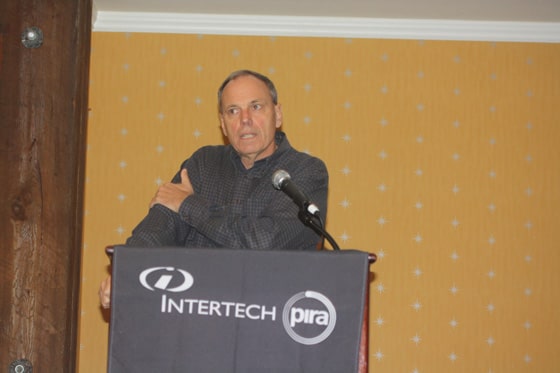 Doug Klein originally cut his teeth working on old school terminals and communication systems before joining Barnes and Noble. Since joining the company and meeting with CEO of Amazon Jeff Bezos 10 years before the Amazon Kindle was created and saw the tremendous growth of the Nook line of e-readers.

The Nook group at Barnes and Noble was top secret when it launched in 2009 and the department was built completely from scratch. It grew from 0 to 100 employees during the course of only 1 year and saw the release of the original Nook 3G. He mentioned that the Nook went from 0% to controlling 30% of the entire e-reader market and within six months the Nook had a million users.

Doug saw the entire e-reader sphere moving from mass market awareness to mass market consumption. If you look at the holiday season last year, sales went through the roof. This is why the company is paying attention to Amazons recent release of three new e-readers and a tablet and are prepapring their own offerings to be announced soon.

The Nook Color was the most successful product the company put forth to date and saw the entire paradigm of the of the color e-reading experience change. It moved from exclusively reading books to the rise and popularity of magazines. Barnes and Noble has been signing many publishing partners over the course of the last year and now offers 100’s of big name offerings.

Doug Klein said that mobile computing via e-readers and tablets are growing expodentially. He mentioned that Barnes and Noble sees 15% of all web traffic to BN.com coming from mobile devices and his IT department has said that it will increase to 60% over the course of the next few years.

He arbitrutes the success of the Nook line of e-readers and Nook Color primarly to the female demographic. This in turn due to sheer sales has made the line of devices the most successful Android driven device to date.

We asked him what were the key points of success with their business model and the Nook e-readers. He responded with proclaiming they are all about content discovery. “Bookstores are discovery engines, there is a reason why stores are laid out the way they are. With racks of magazines at the back to drive traffic through the store. From staff picks to our coffee shops and their exact positions are all meticulously thought out.

What about the recently announced Amazon Fire and the Nook Color? He said that the Fire is more about streaming services and Amazon Prime while Barnes and Noble is more focused on Magazines and programs like NookKids.