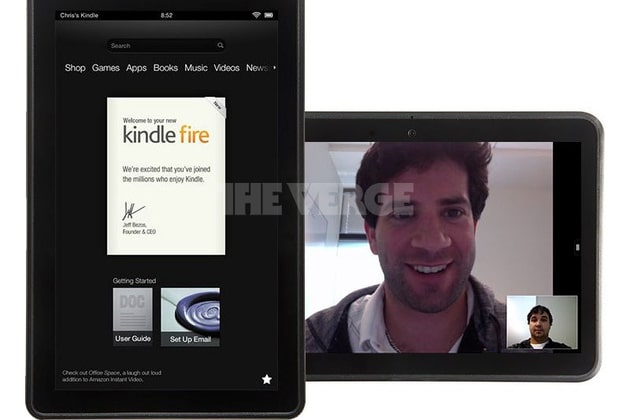 With all eyes (and ears) to the Sept 6 event where a new Kindle Fire device along with a new e-book reader and a Kindle Fire dock is set to be launched, what we have are a few pointers that should give us an idea of what to expect on that auspicious day.

While a direct successor to the Kindle Fire in the form of a 7 inch device is assured, there can quite possibly be a 10 inch sized device in the offing as well. Multiple variants of each is also expected to tap different price points. The Verge carried an image of what is believed to be the next gen Kindle Fire, though there has been doubts about its authenticity. The image supposedly that of the Kindle Fire presented a squarish display with thin bezels not only along the two sides but also at the top and bottom as well. Adding to the suspense are a few more images that however reveal a device that again is a lot similar to what the Kindle Fire is right now, except for a ‘prominent notch’ along the sides (longer edge) which seems to be a mic. Surely a nice feature if it is true and if the price continues to be as competitive (and no reason to believe why shouldn’t be) as the first gen Kindle Fire.

As for a successor to the Kindle Touch, a new model with a ‘Paperwhite’ back-lit display could be a reality. While all past Kindle e-reader models had been based on the e-ink Pearl display, the new version sports a dark gray color scheme to the point that it almost looks black. The display on the other hand is of a brighter resolution, and more contrast to allow for an even more enriching reading experience. Battery life is expected to be around 8 weeks and could be considered a direct competitor to the Nook Simple Touch with GlowLight that Barnes & Noble had launched last year.