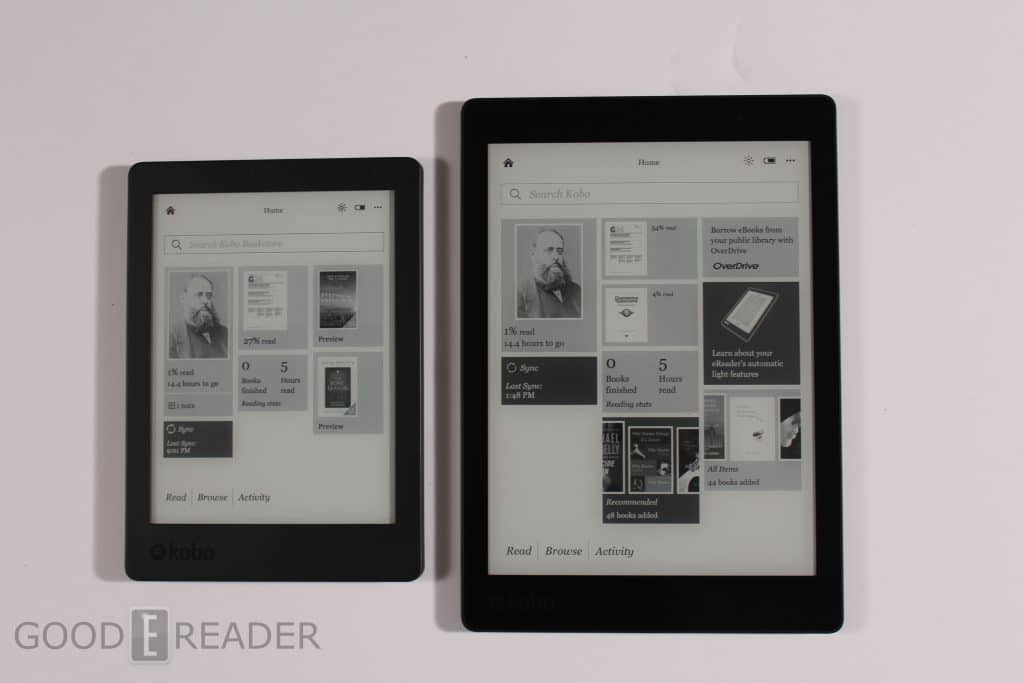 Welcome to another Good e-Reader Comparison Video! Today, we take a look at the new Kobo Aura Edition 2 and the Kobo Aura One. Both of these new devices are available to order and many people are wondering what makes them unique.

The Edition 2 features a six inch E-Ink Carta display with a resolution of 1024 X 768 and 212 PPI. These specs make it a very basic e-reader by 2016 standards and there are plenty of similarly priced alternatives on the market, such as the Kindle Paperwhite that has a resolution of 1430×1080 and 300 PPI.

Kobo has not disclosed the processor or how much RAM this device is using. I have reached out to them for an official comment and will update this review once I hear back. If I had to guess, it is very likely they are using a  1 GHz Freescale i.MX507 processor, and either 128 MB of RAM or 512 MB of RAM. There is 4 GB of internal memory and with no option to enhance it via an SD card for your average user. There is a hidden SD card on the circuit board, but it powers the operating system. There is no easy way to insert a higher capacity card unless you know how to use clone imaging software.

Underneath the hood is a Freescale 1GHz processor and 512 MB of RAM, the same as you get with most new Kindles. There is 8 GB of internal storage and there is no publicly available SD card. Instead, the SD card is grafted to the circuit board and powers the Linux operating system.. There is no easy way to remove the back platting, because of the waterproof design.

The big differences between these two models is the front-lit display on the Aura One. It has automatic settings and a light sensor, not to mention it can limit the amount of blue light from your screen. On the software side of things, the Aura One has Overdrive functionality. This will allow users to borrow e-books and read them, without the need of a PC.