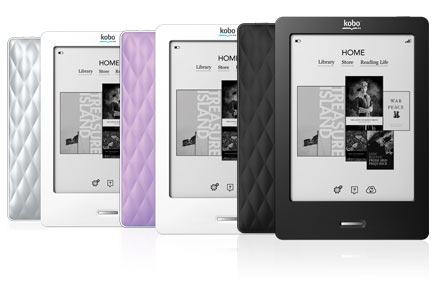 Kobo announced today they have experienced record sales during the Christmas holidays. The company proclaimed today that they now have over five million registered users and that the user population has doubled during the last six weeks. They also saw sales dramatically increase by almost 5X, and the gifting of ebooks by 500%.

“This holiday season broke every foreseeable record for Kobo, and we have exceeded our expectations driving several ebook downloads per second through the holidays,” said Michael Serbinis, CEO of Kobo.  “I would like to thank our customers for choosing Kobo to start building their digital library – our success this holiday season is a precursor to a New Year with people reading more than ever thanks to eReaders, eBooks, and Kobo.”

Check out the Press Release for the full scoop.

TORONTO, ON — January 5, 2012 — Kobo, a global leader in eReading with over 5 million users worldwide, today revealed record sales for the holiday season.  This year the Kobo eReader was a very popular gift with people around the world receiving new Kobo Touch, Kobo Vox eReader and Kobo Wifi devices, driving company sales to a record high.

Kobo saw strong momentum with a 10X increase in new customers from the company’s pre-holiday period, and hundreds of thousands of devices were activated each day since Christmas Eve, fuelling the highest eBook download rate in Kobo history – with eBooks being sold to Kobo customers every second of the day.  Due to Kobo’s broad international footprint, people around the world chose Kobo this Christmas for their popular easy-to-use Kobo eReaders, top-rated free eReading applications for iPad, iPhone, Blackberry, Android, and one of the largest global eBook catalogues in the world with over 2.5 million eBooks, newspapers and magazines.

“This holiday season broke every foreseeable record for Kobo, and we have exceeded our expectations driving several ebook downloads per second through the holidays,” said Michael Serbinis, CEO of Kobo.  “I would like to thank our customers for choosing Kobo to start building their digital library – our success this holiday season is a precursor to a New Year with people reading more than ever thanks to eReaders, eBooks, and Kobo.”

The Kobo eBook gifting and eGift card program was more popular than ever this year, with people sending electronic gifts set to “arrive” digitally in recipients’ email accounts on Christmas morning.  eGifting more than tripled this holiday season and was adopted as a convenient gift giving solution.

The top four most popular eBooks gifted this holiday were:

THIS HOLIDAYS MOST POPULAR READS

Two of the most popular books purchased this year in both the US and Canada on Christmas Day were Kathryn Stockett’s The Help and Suzanne Collins’ The Hunger Game .  Elsewhere in the English-speaking world, customers were looking for a deal.  A £0.49 sale on Karin Slaughter’s The Unremarkable Heart drove strong sales in the UK, Australia and New Zealand.  In the UK, Slaughter was joined in the Top 3 by self-publishing sensation John Locke, who sells his thrillers for $0.99.  Book sales in the UK for the holiday season increased over 7X the previous daily average for December.

Kobo expects 2012 to bring additional surprise bestsellers from self-published authors, whether through direct relationships or aggregating partners.  The pricing experimentation Kobo has seen from publishers large and small will likely continue, as they work with ebooksellers to drive visibility by pricing select titles at pocket change for a limited time.

Canada
1. The Help by Kathryn Stockett
2. The Litigators by John Grisham
3. The Hunger Games by Suzanne Collins

United Kingdom
1. The Unremarkable Heart by Karin Slaughter (on sale for £0.49)
2. The Girl with the Dragon Tattoo by Stieg Larsson
3. Saving Rachel by John Locke

Australia
1. Water for Elephants by Sara Gruen
2. Red Mist by Patricia Cornwell
3. The Unremarkable Heart by Karin Slaughter (on sale for £0.49 or ~$0.64 AUD)

Rest of World
1. Steve Jobs by Walter Isaacson
2. Locked On by Tom Clancy
3. The Help by Kathryn Stockett

Kobo offers the industry leading social platform, Reading Life, which enables readers to connect with friends, track reading statistics, and unlock fun and exciting awards just for reading.  Members can also create book clubs and discuss their favorite reads on Facebook.  With Kobo Pulse, readers can feel the pulse of a book, start conversations, share comments and thoughts and leave reviews by ‘Liking’, ‘Disliking’ and/or commenting, in real-time, with others who are reading the same book.

Since the launch of Reading Life in 2010, over 8.8 million Reading Life awards have been given out– simply for reading.  100,000 awards were given out this Christmas Day alone – the top award given was the Once Upon a Time award that is given for starting to read your first ebook.  On Christmas Day, 50X more people signed up to engage socially with friends on Reading Life compared to the same day in 2010.

CONSUMERS’ CHOICE IS AN OPEN PLATFORM

This holiday season, open standards and the ability to read freely on any device is a consistent theme.  With Kobo, customers can build their lifetime libraries as they choose and read on multiple devices by downloading a free Kobo eReading app at www.kobo.com.  Consumers can also download books for free, borrow and read eBooks from their local library on the Kobo Wireless eReader and the Kobo Touch eReader– and alternatively they can read Kobo eBooks on other dedicated eReaders like the Sony eReader and Nook.

About Kobo Inc.
Kobo is a global eReading service with more than 2.5 million eBooks, magazines and newspapers – one of the largest eReading catalogues in the world.  Read Freely – Kobo believes consumers should have the freedom to read any book on any device and has attracted millions of readers from over 100 countries across the globe.  Kobo has top ranked eReading applications for iPad, iPhone, BlackBerry, Android, Windows and MacOS, and is the eReading application of choice for leading tablet OEMs.  Kobo eReaders, including the Kobo Touch and the newly launched Kobo Vox are available at leading retailers, including Indigo, Walmart, Best Buy, Target, Future Shop, WHSmith, FNAC, Collins Booksellers and Whitcoull’s.  Kobo’s innovative Reading Life is an industry-first comprehensive social eReading experience – Kobo users can earn awards simply for time spent reading and encouraging others.  Kobo is backed by majority shareholder Indigo Books & Music Inc., Cheung Kong Holdings, and institutional investors.