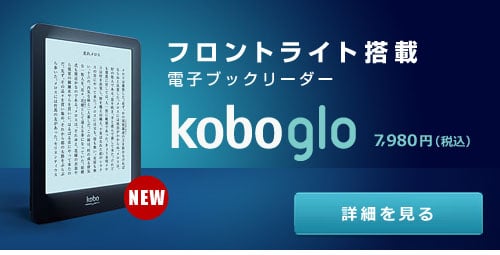 The Kobo Glo and Kobo Mini e-Readers are making the long trek to Japan in the coming weeks. The Glo is available for pre-order right now via the Rakuten website and will be shipping out to customers and retail stores on November 15th. Meanwhile, the Mini will take a bit longer to arrive with an early December street date.

The Kobo Glo is the best e-Reader the company has ever released in terms of hardware and overall user experience. It features a high resolution e-Ink display and small LED lights built into the bottom of the bezel. This will allow you to customize the glowing screen via the slider controls. You can easily read both in the sun and in super dark rooms.

Finally, the much loved Kobo Touch (the number one selling product in July on the Rakuten-Ichiba online marketplace) is now available for the amazing price of ¥6980 – that’s a ¥1000 discount!