You are here: Home / e-Reader News / Kobo Introduces Instapaper for the Apple iPad 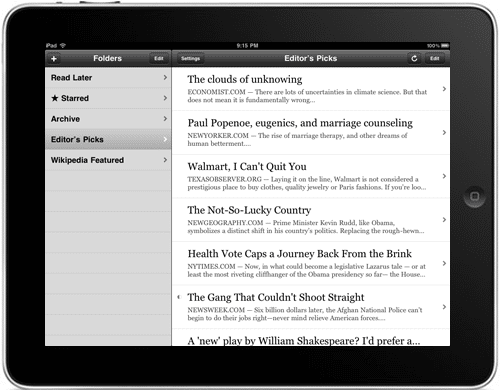 Kobo has been hard at work lately upgrading their iOS updates for their Kobo e-Reading application. It was only a few weeks ago that they updated their software and introduced Reading Life, to allow people to unlock achievements by reading books and interact with each other. Today Kobo released another update for the e-Reading application for the Apple iPad that introduces a new feature called Instapaper.

The most significant feature in the latest Kobo update to their iOs update is the integration of Instapaper into the Kobo eReading application. What is Instapaper? Well it facilitates the easy reading of long text and lets users easily save articles and other types of web content to read later via their Kobo eReading application. This insures that if you do not have time to read your favorite blog, such as our own Good e-Reader Blog, you can read it via the Kobo App now!

“People are constantly discovering a wide variety of great information on the web, but they don’t always have the time to read everything that they come across,” said Mike Serbinis, Kobo CEO. “With Kobo’s integration with Instapaper, readers can clip, save, and read this content anytime, anyplace they choose using the Kobo eReading application for iPad, iPhone or iPod Touch.”

With today’s announcement, Kobo users will also be able to “Like” books and share what that they are reading with their friends on Facebook. Also newly introduced, iPhone and iPod Touch users can share favourite passages and notes from any book to Facebook. Not only can you “Like” books, but you can also update your status update by highlighting an excerpt using the Apple iPads copy function.

Also, Kobo announced that during the holidays, starting December 24th 2010, you will be able to unlock special holiday reading badges using the iPad version of the Kobo app! Finally, if you are downloading the Kobo App for the iPad for the first time, it does come with a number of free ebooks including Alice in Wonderland, The Adventures of Huckleberry Finn, Dracula, The Memoirs of Sherlock Holmes and Grimm’s Fairy Tales.

Speaking of Kobo! Don’t forget to enter our contest for a Free Kobo Wireless e-Reader.