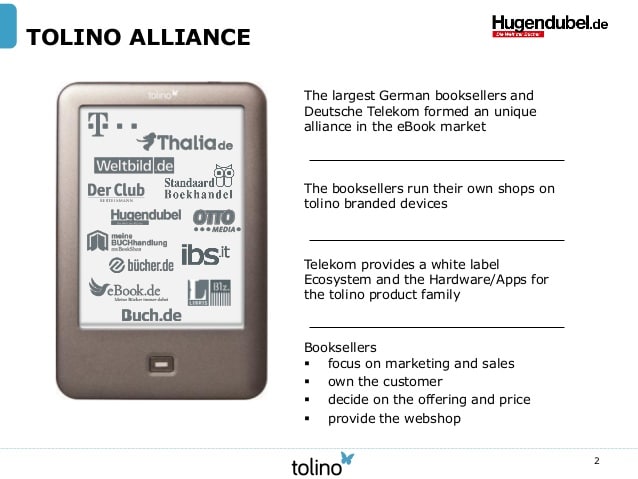 Rakuten Kobo is in the process of purchasing a majority stake in Tolino. It is very likely that Kobo wants to get access their digital bookstore, which has thousands of German language e-books. It is also said that Kobo will get access to the software which powers the Tolino line of e-readers and backend software that powers the cloud sync platform.

The Tolino Alliance was formed in 2013 and their mandate was to combat Amazon in Germany. This was the first time Thalia, Weltbild, Hugendubel, Club Bertelsmann, Deutsche Telekom banded together to forge a series of e-reading devices and launch an online bookstore.

One of the principle owners of the Tolino Alliance is Deutsche Telekom and they have just filed paperwork with the Bundeskartellamt, the German Federal Cartel Office, to sell its stake in the Tolino ebook platform to Rakuten Kobo. It is currently unknown if the other Tolino Alliance members also intend on selling their share of the company, but we should know more in a couple of days.

Rene d’Entremont, the Director of Public Relations at Kobo stated to Good e-Reader that “Rakuten Kobo has entered into an agreement with Deutsche Telekom for the purchase of assets related to eBook technology, and will share details as they become available.”

I have a feeling Kobo wants to get access to the Tolino software that powers their e-readers and the apps for Android and iOS.  Kobo hasn’t really changed their e-reader software in the past five years and it is due for an overhaul. I also surmise that Kobo wants the Tolino line of e-readers to continue to be sold in Germany, since it’s a brand name that is recognized.  This is similar to how Overdrive and Aquafadas continue to be run as autonomous units.