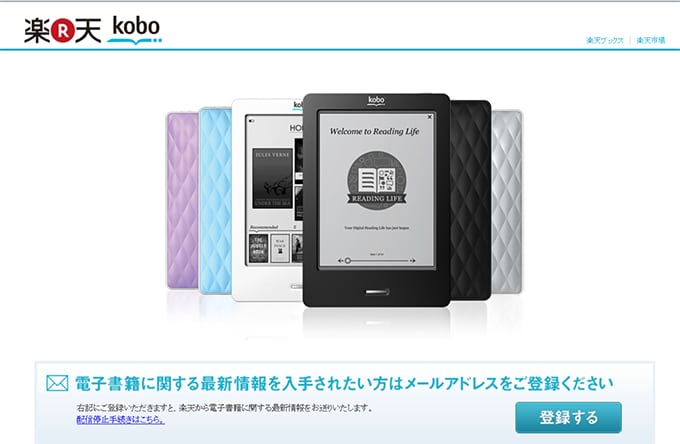 On July 2nd, Kobo will officially launch its e-reader and bookstore in Japan! The Kobo Touch e-Reader is now available for pre-order through Kobo’s parent company and the world’s third-largest e-commerce company, Rakuten. On July 19, Kobo will launch a fully localized Japanese experience at http://kobo.rakuten.co.jp, with local currency and popular Japanese content and authors.

The Kobo Touch is available for pre-order right now for ¥7,980 (or $100 USD), including tax. One of the most exciting elements about the new launch is that the firmware will use Epub3, which supports layouts unique to the Japanese language, including vertical text and ruby characters. Kobo is the first company to fully adopt the ePUB 3.0 format for its Japanese digital bookstore.

We spoke with Todd Humphrey, the EVP of Business Development. He said that “Over 300 Journalists appeared at the press conference in Japan and pre-order sales have been through the roof. Japan is one of the largest markets in Asia and Rakuten helped us approach publishers and newspaper companies.” We asked him where the focus was and how the Japanese Market has grown up in the last few years, and he said, “When Sony entered the Market for the second time a few years ago publishers started to warm up to the idea of digital books, this helped us gain more acceptance and publishers realize we are not trying to cannibalize the book industry.”

Kobo plans on just releasing the Kobo Touch e-Reader in Japan for now, but does intend to roll out a new tablet in the coming months. Todd mentioned that “First and foremost, Kobo is an e-reader company and with so many tablets on the market, we had to stay true to our roots. From our market research it showed that people really do want a high quality e-reader that is affordable on price and easy to carry around with you. We do plan on releasing a tablet later on in the year, but not right now.”

So how does Kobo plan on marketing its Touch e-Reader and Japanese eBookstore? Todd said the company is adopting a “Rolling Thunder market campaign! We will be promoting the service through traditional media, billboards, newspapers and online. This is the main reason why we are announcing it now and selling them on July 19th, to build momentum.”

The entry into Japan marks almost a full year of constant negotiations with publishers and Rakuten. Amazon is trying to push hard into Japan, but it looks like Kobo has beaten Amazon to the punch. On July 19th, when the ebook store opens, there will be thousands of comics, books, graphic novels, ebooks, and essays available in Japanese.