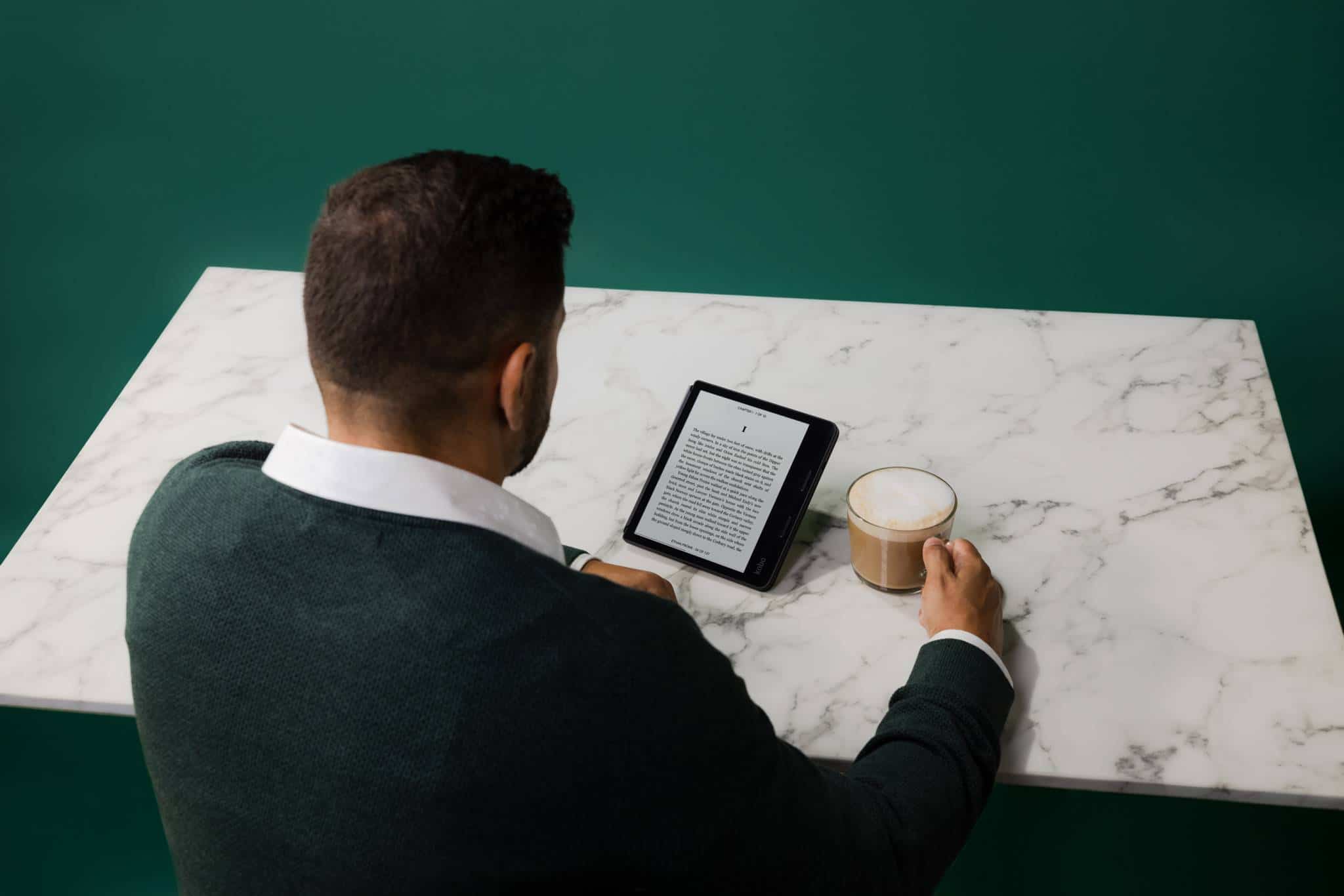 Kobo has a brand new product that they are going to be releasing at the end of October, called the Kobo Sage. This e-reader has full support for the Kobo Stylus, which first debuted with the Elipsa, and is fully compatible with the Sage, so you can make notes and freehand draw.  The stylus does not come for free with the Sage, but is an optional purchase for $49.99. The biggest selling point is the inclusion of Bluetooth for full support for wireless headphones and speakers. Users will finally be able to buy and listen to audiobooks purchased from the Kobo Store, right on their device.

The Kobo Sage features an E INK Carta 1200 display. This new screen tech delivers a 20% increase in response time over E Ink Carta 1000, and an improvement in the contrast ratio of 15%. In addition, faster response time enables smoother handwriting and animations displays. This is how the technology works, the 1200 modules consist of a TFT (thin film transistor), Ink layer and Protective Sheet. The capacitive touchscreen is incorporated into the module stack. Kobo is utilizing the Digitizer stack, which supports robust stylus integration. with the touch sensor sitting under the TFT. How does this affect the overall user experience? The background will have more gradients of grey and the black fonts will really pop.

The screen is 8 inches in size and has a resolution of 1440×1920 with a staggering 300 PPI. It has a series of white and amber LED lights which provide a nice candlelight effect when the two are blended together. Of course, the amber LED lights can be totally turned off and you can enjoy a vibrantly white screen.

Underneath the hood is a massive 1.8 GHZ quad-core processor , which is the first time Kobo has ever employed anything more than a single core. It has 32GB of storage and 512MB of RAM. You can connect up to the internet using the web-browser via WIFI 802.11 ac/b/g/n (dual band.) It has a USB-C port, so you can charge it with your PC/MAC or wall charger. It is powered by a slightly underwhelming 1,200 mAh battery, which should provide around three weeks of ebook reading and less if you listen to audiobooks. The dimensions are 160.5×181.4×7.6mm and weighs 240.8g. It is also rated IPX 8, so it can be totally submerged in fresh water for up to 60 minutes and a depth of 2 meters. This should be a boon to anyone who wants to read it in the bath or the beach, or are clumsy like me, and often spill things.

Speaking of audiobooks, this is something that Kobo is getting very bullish about. They have been selling them for a number of years and the Sage is the first e-reader that will allow users to browse the bookstore and purchase audiobooks, existing audiobooks that have been purchased, will automatically sync to the library. Audiobooks cannot be sideloaded, but of course ebooks can. The Sage supports EPUB, EPUB3, PDF, FlePUB, MOBI, CBR and CBZ. I was told by Kobo that Overdrive audiobooks are not available at launch, but I got the feeling they will, at a future date.

The Sage seems like a very compelling device. It seems like it is the spiritual successor of the Kobo Forma. The back of the Sage is flush and has a tapered pattern, which should cut down on fingerprints. It seems like this has a flush screen and bezel design.

The Sage will be available at www.kobo.com and select retailers, Kobo Sage will retail for $299.99 CAD or $259 USD. Pre-orders will be available on October 5 and it will be available in retail stores on October 19th in Canada, the US, the UK, the Netherlands, Belgium, France, Italy, Spain, Portugal, Sweden, Switzerland, Australia, New Zealand, Singapore, Taiwan, Hong Kong, Japan and Turkey. If you live outside of these countries, you can pre-order it from the Good e-Reader Store.

Will you buy the Sage? It is part e-reader, part e-note and has audiobook support. This might be the most fully featured Kobo product they have ever made.