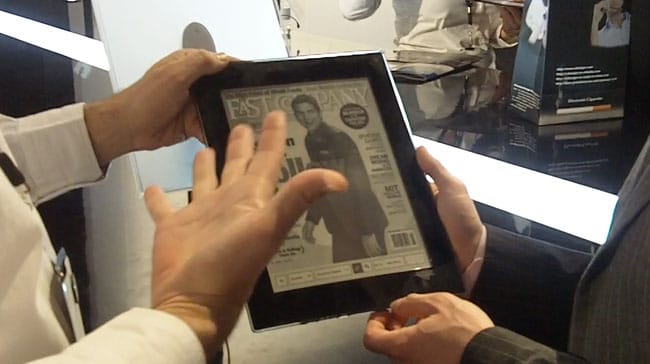 Cambridge UK based Plastic Logic has just confirmed it is getting out of the e-reader business. It intends on immediately closing down the USA development offices and continue to operate out of their Cambridge headquarters. The company has shifted its business model away from marketing e-readers that use their flexible display technology and instead will license it to other companies.

Plastic Logic CEO Indro Mukerjee says: “Plastic Logic has always been at its core a dynamic technology company. Having recently achieved significant milestones, including being the first in the world to fully industrialize the mass-production of flexible plastic displays, we are now well positioned to address a broader set of applications and markets throughout the world.”

The UK based company found it hard to compete in North America and scrapped plans to launch its eagerly anticipated QUE e-reader a few years ago. It recently launched the PL 100 e-reader last year to make a play for lucrative government contracts in the Russian educational system. The Plastic Logic 100 used a new technology that is neither LCD nor eInk, but instead is patented PlasticPaper. Because the base is not glass, the Plastic Logic 100 display is large, thin, lightweight, and uniquely shatterproof and rugged, which is especially important given constant use by students. The resolution is 1280×960 and has 150 PPI! It has a capacitive IR touchscreen interface that makes interacting with it easier than most touchscreen e-ink devices.

Plastic Logic plans on licensing various facets of their technology to vendors who want to use it in their products. Plastic Logic’s pride and joy is the flexible screen technology called “PlasticPaper.” There are no specific announcements in terms of who is signing on to license the technology, but you would figure some companies are lined up.

Is there a market for this type of screen technology? e-Ink Holdings currently has a dominant stranglehold on the market. Other companies are finding it very hard to compete in the e-paper segment. Mirasol only recently released its new screen displays, but only Eastern companies have signed on and the displays remain irrelevant in North America. Pixel QI also has superb e-paper that mimics e-ink but has higher resolution, and only a spartan amount of companies have ever signed on. Other companies completely go under without ever releasing a single product. Only yesterday Bridgestone scrapped its QR-LDD technology because it could not release products by itself and found no investment to release commercially viable products. The one thing Plastic Logic has going for it is that it owns its own means of production. It is quite easy to pump out a copious amount of screens for new clients, but will anyone take the risk and sign on?