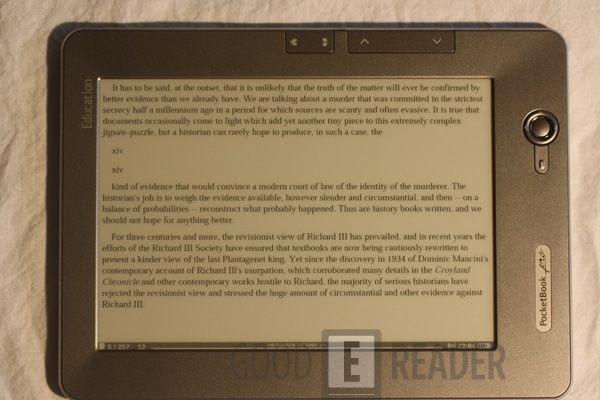 The Pocketbook 912 PRO has just hit Eastern Europe and might see a North American Release sometime in 2012. Today we take a look at the latest generation 9.7 inch e-reader and it has some surprising new features.

The Pocketbook 912 PRO Education Edition is a 9.7 inch touchscreen e-reader with a resolution of 1200×825 pixels. The big selling point on this device is the touchscreen interface. It comes with a bundled Stylus and you must use this to interact with the e-reader. I found from my extensive testing that your fingers does not register with it and the Stylus is needed to take advantage of the new interface. If you someone loose it or don’t want to use the touchscreen you can use the D-PAD and manual page turn buttons.

Interacting with the touchscreen on the 912 is very fluid and fast and is more robust then the 612 we recently reviewed. It is hit or miss when using the stylus to turn the pages of a book but launching applications and browsing around is quick.

The Pocketbook 912 is one of the few e-readers released by the company to have full wireless internet access. There is a switch on the top of the e-reader that allows you to manually switch it on or off. This is great because it will obviously extend the battery life of a single charge when you are not connected to the internet.

Underneath the hood of the 912 is a 533 MHZ processor and 256 MB of RAM. It has 2 GB of internal storage and you can increase it up to 32 GB via the MicroSD card. It feels like the hardware is not able to keep up with the touchscreen at times. Most other touchscreen e-readers are running a 800 MHZ CPU and at least 512 MB of RAM. It is not a deal breaker but know that the hardware feels a little bit sluggish at times.

The inclusion of the touch panel adds a bit of extra weight to the device compared to the Pocketbook 902 that was released last year. It is not super heavy per say, but I found holding it for anymore then 30 minutes became an exercise in willpower!

Pocketbook is known for releasing devices that have everything you need to read and listen to audio. It comes bundled with two speakers giving you stereo sound. Volume levels are solid and if you don’t want to disturb anyone with your music or audiobooks you can plugin some headphones via the 3.5 mm headphone jack.

I was quite surprised to see a full 360 accelerometer that switched from landscape to portrait mode very quickly. Most e-readers suffer from a long delay when switching orientations but this did a great job. Almost all menus and programs adhered to the ability to switch up your prospective. That only things that did not allow you to do it was the built in web-browser and applications menu.

In the end, the Pocketbook 912 feels like a slick modern update with the inclusion of the touchscreen display and internet access. I liked the fact it had a manual switch to turn the internet on/off. Normally WIFI is buried in many sub-menus and it was a breeze to conserve some battery life. 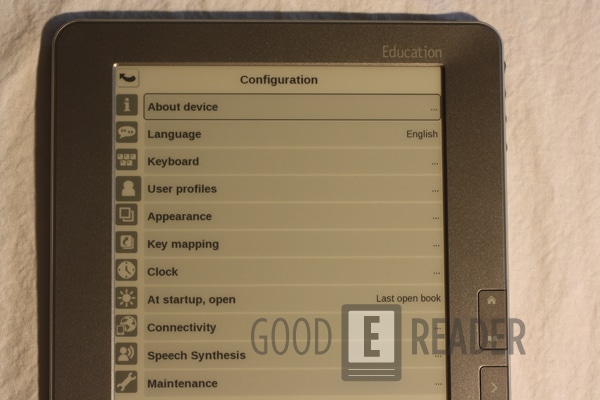 The Pocketbook 912 is running on the standard Linux operating system the company is known for. The homscreen is well designed and has a clock, dictionary, last read books and a list of your main applications and features.

The main programs you will find yourself using is the Dictionary, Web Browser, Music and Photo Apps. There are many games that come bundled on the device but are relegated to classics such as “Snakes!” This might have been cool 10 years ago.

Dictionary support is extensive and has almost 12 different iterations depending on what language you speak. Pocketbook is great with marketing their e-readers to an international audience. It has support for French, English, Russian, Spanish, Dutch, German and many more!

Speaking of different languages there are roughly 1000 books that are shipped on the device. This allows you to get reading right away and if you feel like more content you can tap into the Bookland store Pocketbook has partnered with. There is not a huge selection of content here which is always a drawback. You won’t find many bestsellers or popular books but there are a fair number of classic books optimized for the 912 e-reader.

The 912 is compliant with Adobe Digital Editions with EPUD and PDF formats. This means you can feel free to shop at other bookstores that deal with EPUB as their primary format. Barnes and Noble, Kobo, Smashwords, and other companies are at your disposal to shop for books. If you want to just straight download books from the internet, Pocketbook is well known for having a very open ecosystem. It has built in support for CHM, DJVU, DOC, DOCX, EPUB, FB2, FB2.ZIP, HTML, PDF, PRC (Mobipocket), RTF, TCR, and TXT formats.

Having access to so many book formats is the big selling point on the 912 e-reader. It is known as the geeks device and makes it easy on customers to not have to endlessly convert their collection to a singular format in order to read the books.

Books are organized via the Library app and it does a fair job at letting you know what format the books are in with little icons that display TXT, EPUB, PDF and so on. This makes it easy to ID what content is in your main library but there is no ability to sort things into collections easy right on the e-reader. Instead you need to open up Windows Explorer and manually create directories and put files in there to sort it out. You can also also 3rd party programs such as Calibre to sort by authors, collections or whatever else you want to do.

During our tests we loaded on many comics, newspapers and other content to see how the device would handle it. I was surprised with the myriad of re-flow and zooming options present to optimize your experience. Newspapers looked exceptionally well and there was minimal configuration warranted to get the best display possible. Scanned comic books took a little bit longer to flow properly but having them show up in landscape mode really helped. In order to get your PDF content showing up properly you do really have to configure your zooming options on each individual book.

If you need an e-reader designed for PDF reading and you want e-Ink instead of backlite devices such as the Apple iPad, I would really recommend the Pocketbook 912 or 902 in terms of multimedia accessibility and content display. 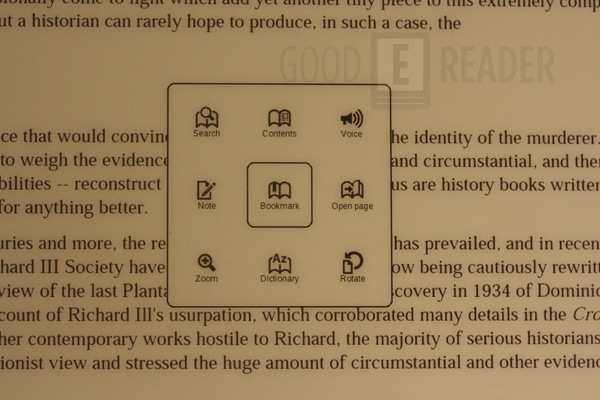 The Pocketbook 912 is a step in the right direction for the company and firmly elevates their game by delivering touchscreen displays which customers crave. The WIFI and Internet experience is a welcome addition to the lineup and it even supports HTML5.

The hardware feels sluggish at times when you are browsing the internet or interacting with the touchscreen display. Part of this is because of the 533 MHZ processor and 256 MB of Ram. Considering this device when it hits North America will retail for close to $500, I would prefer to spend $550 and have more RAM and a higher grade processor. It still retains its speed when you use the DPAD and built in buttons instead of relying on touch alone.

The Pocketbook 912 is a solid, well built device. I had the chrome edition and it looks very slick. It is a bit on the heavy side but these large 9.7 screen e-readers are not meant to be held in a single hand over the long term.

I would recommend this device if you need it for work or for presentations. Many people constantly email us what is the best large screen e-ink based device that is optimized for PDF and Newspapers. I would have to say the Pocketbook class of devices is really want you need. The drawback is they are an indie company and products are on the expensive side. In retrospect Pocketbook is not a fly by night company and has a great track record of making devices for the last three years.