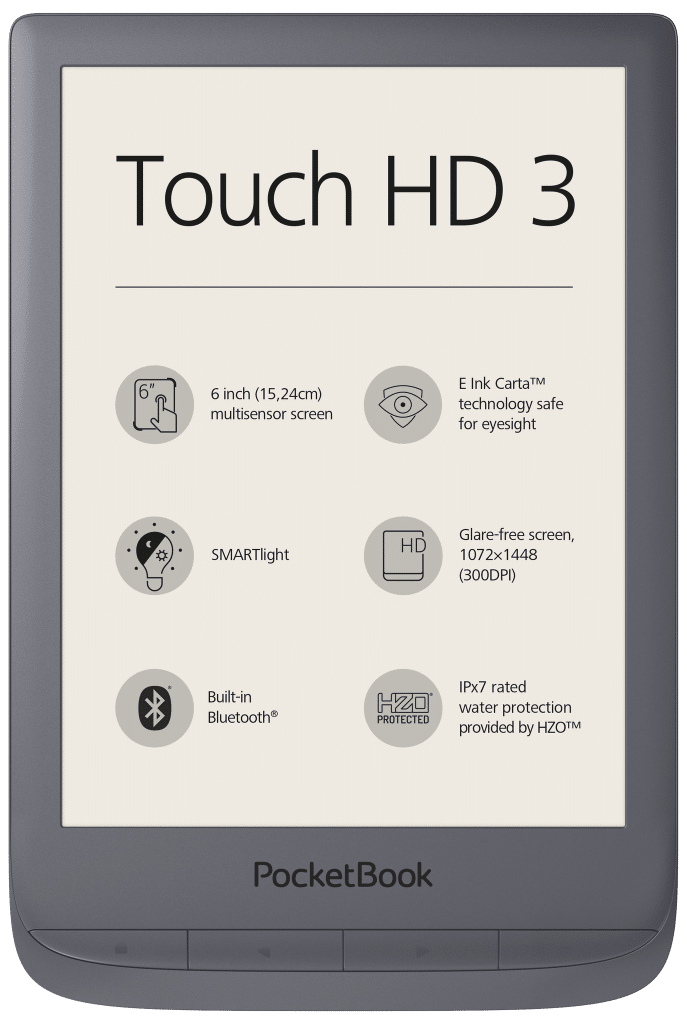 Pocketbook has just announced the Touch HD 3 at the Frankfurt Book Fair and the company is betting that their premium features will be a big draw. The device has a color temperature system called Smartlight that will help mute the bright white LED’s of the front-lit display and it is also waterproof with an IPX7 rating, so you can read while in the bath or at the beach. It also has audio support via Bluetooth, so you can listen to music or audiobooks.

The Pocketbook Touch HD 3 features 6 inch E Ink Carta HD screen with a resolution of 1440X1080 and 300 DPI. It has a front-lit display to read in the dark and also a color temperature system that warms the screen up. It also has an IPX7 rating, so it will survive being completely submerged for around 30 minutes and will also be immune to dumping liquids on it. The screen is not completely flush with the bezel, instead it has a very small dip.

Underneath the hood is Dual Core 2.1 GHZ dual core processor, 512MB of RAM and 16GB of internal storage, but does not have an SD card. One of the big selling points behind this device is the audio support. Integrated audio features are available via a micro USB audio adapter and Bluetooth wireless connection. The PocketBook Touch HD 3 supports both mp3 and m4b audio formats, providing a convenient opportunity to listen to and bookmark your audio books. The Text-to-Speech function converts text into voice and allows the e-reader to read aloud any text file from the device’s supported formats.