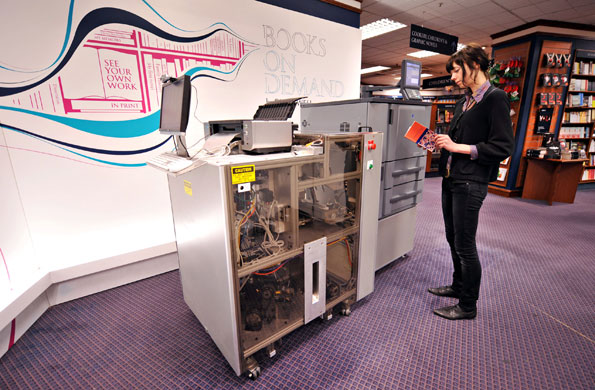 Richard Curtis, literary agent and founder of the oldest independent ebook publishing company E-Reads, recently posted an article for Digital Book World on where print-on-demand can potentially take the publishing industry and what price barriers are currently stopping it from faring as well as it potentially can. Curtis spoke with GoodeReader today about where POD can lead the industry as a whole.

“E-Reads has been using Lightning Source for its POD services since we began in 2000. LSI is the biggest in the industry, perhaps in the world, in print-on-demand. Because they are a division of Ingram, a book distribution company that has very successfully made the transition from a company that serviced print publishers to a company that now services the digital book industry, we feel that there are advantages to being with LSI that you simply cannot get with any other POD publisher. Among other things, their core source service enables us to reach indie bookstores, a great many of which we could not otherwise reach.”

One aspect of POD that Curtis mentioned in his recent blog post is the prohibitive cost per book when comparing a typical print run of a trade paperback with the cost of printing one title at a time per customer request. Lightning Source has countered that cost in a deal with EPAC, one of the largest POD suppliers in Germany.

“From speaking to executives at LSI and asking if there is any possibility in the future that the costs of producing PODs might come down, they have told me that there are developments that they cannot currently discuss that make them hopeful that the prices will come down.”

But why such a keen interest in print-on-demand? Isn’t the point of digital publishing and the surge in popularity of e-reading related to all the negative things that digital has stripped away, like eliminating paper and ink costs, shipping costs, and wait times to receive new books?

“Many authors want their books available in paper and many readers still want to read books in paper even though they are available in digital format. I’m considered somewhat of a trailblazer in the digital world but I still much prefer to hold a printed book in my hand than to read one on a screen. Even though POD used to represent about 50% of our income in the days when there were no Kindles or Nooks or viable digital readers, POD now represents about 8% of E-Reads revenue, the rest being from digital. Even though POD books are very expensive compared to those printed in the traditional way. A book that might have been $12 to $15 in a traditional print run might cost $20 as a POD, but people are willing to pay it.”

While POD might be a smart move for the indie authors and a certain demographic of readers, whether the publishing industry as a whole will adopt POD as a viable solution remains to be seen.

“I think the industry is being forced into it. The closing of Borders and of so many independent bookstores, the reduction of floor space in bookstore chains like Barnes&Noble, all point to a reduction to the space available to deliver printed books to the consumer on the street. This same segment of the population is going to have to turn to POD. The publishing industry for the last 100 years has distributed its books on a returnable basis. At the beginning of the industry 5-10% of books were returned; now we’re up to as much as 50% of books being returned by bookstores. It’s no longer possible for publishers to sustain 50% returns when POD is an alternative.

“My vision for POD is kind of the Espresso vision, where the Espresso Book Machine will come down in size and complexity to where it will be truly closer to desktop than refrigerator sized. When that happens, you’ll see bookstores with kiosks with thousands of books displayed where you can choose one, but they’re not on a bookshelf, they’re on a screen. You can browse electronically, pick one out, and have a cup of coffee while it prints. It may not be in the immediate future, but I would say within the next ten years you will be able to go into a space and print the book you want. Right now, you have that by simply going on Amazon, but if you prefer the experience of going into a store and browsing for a book that looks interesting, you will see that model evolving. And when someone predicts 10 years, it’s usually five.”