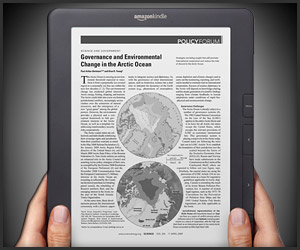 The Amazon Kindle DX is having a sale on their refurbished models for $244 for a limited time. This is a solid e-reader for the money and one of the only ones on the market that feature a 9.7 inch screen, which is the same as the iPad.

The Kindle DX features a 9.7 inch screen and 50% better contrast and resolution from previous models. Its screen displays a 1200 x 824 pixel resolution at 150 ppi, it also has 16-levels gray scale, and a new 10:1 contrast ratio.

One of the great elements on this device is the free 3G internet access provided by Amazon. You don’t have to pay any monthly fees and can buy books anywhere in the world.

The main benefit of this device is reading PDF and academic textbooks. The large screen gives you full screen Adobe documents and seldom requires tweaking via the zoom function. Many students and professionals find these larger screen e-ink devices are very suitable in the field.

The main drawback on the Kindle DX e-reader is the paltry amount of firmware updates it has received during its lifetime. It does not have support for the new Kindle Format 8 eBook format and remains an afterthought with Amazon. Still, it remains one of the best quality large screen e-readers on the market but is mainly available online. Stores and retail chains seldom carry this model because of the prohibitive cost.