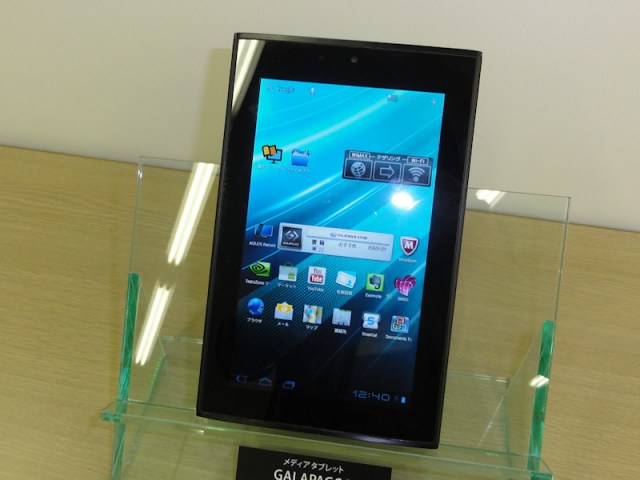 Sharp’s Galapagos range of tablets was supposed to mark its presence in the tablet market while also adding a competitive element against Apple’s iPad. Every tablet in the market has but one common element — that it wishes to be compared and competed against the iPad and Sharp had come up with a 10.8 inch tablet to take on the Apple offering. That it never happened is no secret leading to the tablet being scrapped (along with its 5.5 inch sibling) altogether. The 7 inch version was the sole survivor of the self culling process and now the company has come to offer another 7 incher — the Galapagos EB-A71GJ-B.

However, the Galapagos EB-A71GJ-B shares a lot of similarity with the erstwhile Galapagos A01SH in that the latest tablet also comes with the NVIDIA Tegra 2 dual core processor, 1 GB of RAM along with 8 GB of internal memory. The 7 inch screen would have the same 1024 x 600 pixel resolution while a standard microSD card slot would allow for adding more space. There is also an HDMI output facility for connecting the tablet to an external viewing device. The tablet will also have a 2 megapixel camera at the front and a 5 megapixel unit at the rear. The OS will continue to be Android 3.2 Honeycomb though its not known whether Sharp will be providing an upgrade to the latest Android Ice Cream Sandwich.

However, a unique aspect of the Galapagos EB-A71GJ-B is its support for WiMax feature. What also makes the WiMax connectivity of the tablet unique is that once connected the device turns into a hub and can support seven other devices via its circuitry. The tablet would be made available in Japan from the December 9 for US$780, which it must be said is a bit hefty for a 7 inch tablet. There us not information as yet when the tablet would be launched outside of Japan. Also, not known is whether Sharp will be positioning the tablet as an e-reader device as it did with the previous version and had tied up with several publishing houses to justify it being called an e-reader.