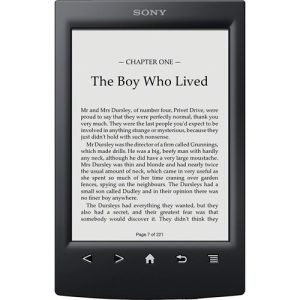 Sony will be officially releasing its latest generation e-reader on August the 16th. This new model will be known as the Sony PRS-T2 and will have a number of enhancements over the previous iteration. The processor is getting a bit of an upgrade to handle to the new IR Touchscreen Display and the device itself looks a bit more elegant than the PRS-T1.

The Sony PRS-T2 features a six inch e-ink Pearl Display with a resolution of 600×800 pixels. It will utilize Clear Touch Infrared Technology, which will offer you pin-point precision when interacting with the screen. There is 1.3 GB of internal memory and a MicroSD to further enhance it up to 32 GB. The battery will last around two months of constant use and even comes with a free Harry Potter book.

The new device is slated to be released in Canada and the USA on August 16th, and then it should be hitting the UK at the end of the month. This is the first new e-reader from Sony in over a year and hopefully will be worth the wait. In the meantime, you can order your new device right now from Shop e-Readers and they will ship it out on the 16th if you order today!