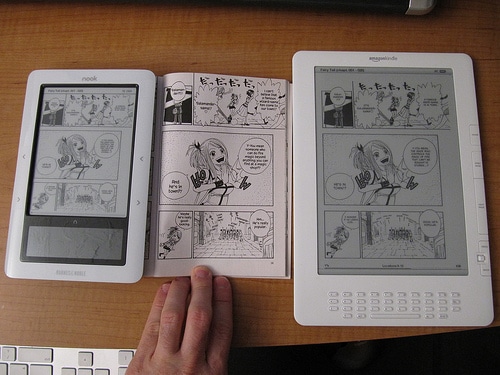 Amazon’s Kindle 2 and Barnes and Noble’s Nook may not typically be fighting for shelf space but are sure battling it out to woo more e-Book readers in its realm. Launched with much gusto, and reviewed widely, the similarities notwithstanding, it is the differences, which might tip the scales from one heavyweight to another.

To a buyer who had almost zeroed in on getting himself the Kindle 2, The Nook appeared and made him rethink. Why? Let’s read on.

Price: Price wise, they are at par with each other, which may not be so much of a coincidence. You pay $259, whether you choose to go the Amazon way or with Barnes and Noble.

Screen: The Nook has color touch screen, allowing the user to scroll through numerous titles in color. Kindle 2, however has the usual Gray scale display.

E-Ink display: The display on the screen using E-Ink enhances clarity and the changeable font size gives it the feel of a real book, very different from looking at a computer screen. This feature is present in both the Nook and Kindle 2.

Wireless capabilities: Both the Nook and Kindle 2 can download with the help of wireless facility or 3G cellular capabilities, as the case may be.

International Availability: The Nook is fully functional anywhere in the US. It can be used outside of the country also, but no new books can be added. Kindle 2 offers full usage in more than 100 countries, and can download books in any of these places. If you need E-books be sure to check out a good e-reader forum

Lending capability: If you have a Nook, you can lend a book for a period of two weeks, to another Nook user, or one having an iPhone or Blackberry with Barnes and Noble software application. The lender will not be able to use the book during those two weeks. The ‘Lend Me’ facility is subject to the approval of the publisher. Kindle 2 does not have the lending capability.

Storage space/ Memory expansion: Both have 2GB storage space, which can be enough for a few thousand e-books. However, it is only with the Nook that you can go for further expansion of the memory with the use of Micro SD expansion slot.

Text to Speech facility: If you have Kindle 2, you will be able to switch from text to speech, depending solely on the user’s convenience. The Nook however, has only the reading option.

Having pondered on the pros and the cons, the similarities and the differences, are you like anywhere close to deciding which one to go with?