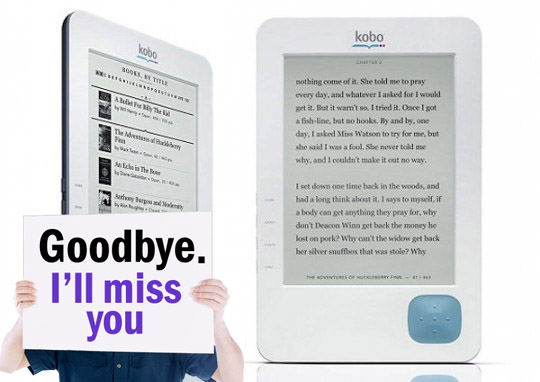 Many sources in Canada are confirming that the original Kobo e-reader (non wireless model) is being phased out of distribution to retail stores. While Kobo has not officially declared this, sources matter say they will soon announce the impending North American suspension within a week or two.

Many well documented problems have plagued the Kobo E-Reader since its original inception. Some firmware updates and the release of the Kobo Desktop software tried to address some of these problems, but people still returned their device in droves. With the success of the Kobo Wireless e-reader and the ability to purchase books directly from the Kobo bookstore, it only makes sense they would phase out the less customer friendly model and go with a device that gives the user direct options to purchase newspapers, magazines and books.

Chapters, Indigo and many other Canadian companies have acknologoed to us via telephone and live interviews that they are sold out and will not be ordering further units. Meanwhile Kobo themselves are no longer taking orders for the Kobo on their website, and Borders Bookstore is not taking online orders anymore.

It seems like the original Kobo electronic book reader is no more, and will not be available in most locations going forward. The Kobo Wireless is the companies new flagship e-reader and their tool to open up new markets in Asia and get more business for their own bookstore.

Kobo is trailblazing solid application development on all major platforms such as Apple, Android, Blackberry, PC and many more operating systems. Some of their features are very advanced and interactive, such as their iPad application which allows character bios and unlockable achievements.