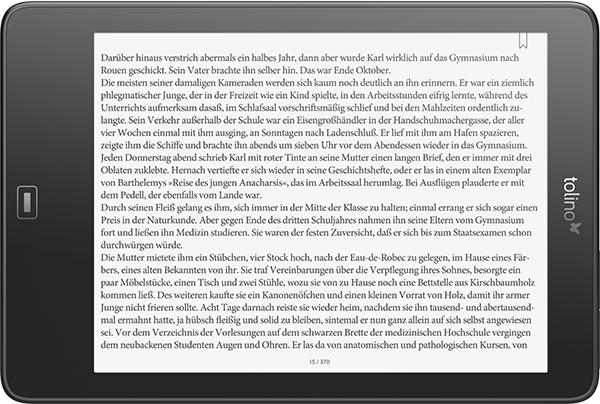 Tolino has just announced the EPOS e-reader and it features a 7.8 inch capacitive touchscreen display with a resolution of 1872 × 1404 with 300 PPI. This is the first Tolino branded product that is larger than six inches and should be a boon for anyone who needs extra screen real estate to read ebooks.

Underneath the hood is a Freescale i.MX6 1GHZ processor, 512MB of RAM and 8GB of internal storage. You will get around three weeks of usage via the 1200 mAh battery. The Tolino Vision series of e-readers have consistently been waterproof and this is the first model of a new series that you can also read in the bathtub or take the beach.

This device is coming soon, with no definitive release date. It will retail for €229 and this is the first model that was produced by Kobo, which has a controlling interest in Tolino.