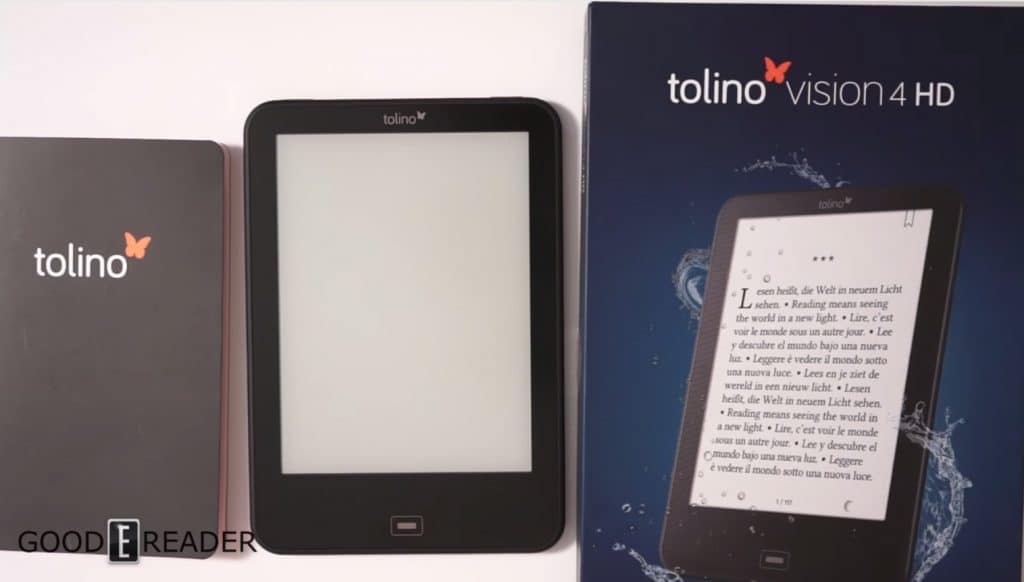 The Tolino Vision 4 HD came out in November 2016 and Good e-Reader is conducting an extensive unboxing video to give you a sense of everything that comes inside and also give you a first look at the hardware.

The Vision 4 HD features a six inch E Ink Carta display with a resolution of 1448X1072 and 300 PPI. The screen is completely flush with the bezel, which makes interacting with the touchscreen a joy to use. This is the second model in the world to feature a different lighting system, which is comparable to the Kobo Aura One. Tolino bills it as a “Color Temperature Light” and although it is not as advanced as the Kobo model, people seem attracted to this feature for reading a night.  It is also waterproof and dustproof.

Underneath the hood is a Freescale IMX6 single core 1GHZ processor, 512MB of RAM and 8GB of internal storage. There is no SD card to expand the memory further, but it does have 5GB of Tolino Cloud Storage. You should get around two weeks of usage with the 1500 mAh battery.

The Vision has always been Tolino’s flagship device and this one is no exception. It has a number of features not found in any of the Amazon Kindle models, such as the RGB lighting system and being waterproof/dustproof. This device is really only applicable if you live in Germany, since the bookstore only stocks German titles. Luckily, it does have Adobe DRM support, so you can borrow books from the library or use Digital Editions to sideload purchased content.