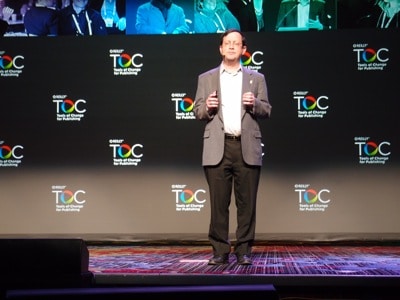 Jeff Jaffe, CEO of WC3 spoke today at the Tools of Change conference in New York.  His main point that he tried to get across during his keynote was “that publishing = web and web = publishing.”  Web people tend to understand this concept, but many people in the publishing industry do not.  20 years ago the web came into being and became an additional form of publishing, but no substitution for print. Eventually tools came out, such as blogging platforms, that turned everyone into a publisher. Now, a lot of core technology changes have made the web a rich place for publishing.

What is the future?  The impact of the web will continue and intensify. Screens, typography, and layout will get better and better.  Links will raise asset value exponentially and rich media will enhance ebooks.  The web’s impact on publishing will probably be greater that the impact on other industries. TV and entertainment are moving to the web and away from the television set.  But what publishing is trying to do with the web is different from what other industries are doing. Other industries are using the web as a delivery mechanism, but the web is more intrinsically tied to the purposes of publishing. For some parts of the industry this is easy to see, such as magazines, but it is harder for book publishers to see. In the future, publishing will be the web. HTML5 and CSS3 provides cross-browser interoperability and rich content management. Just about everyone is moving to this technology. It’s easy to say this, but its hard to do because the web community and the publishing technical community have not been talking to each other. This is causing a lot of sub-optimization. WC3 will be trying actively to encourage a dialog and want to address: matching current publishing practices, leveraging value-add of the web, supporting diverse business and distribution models, and satisfying diverse consumer behaviors.