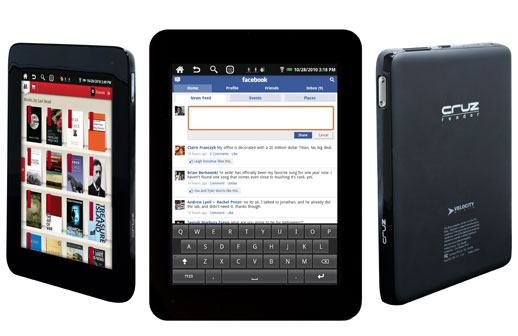 As per the latest e-reader news, Velocity Micro Cruz Reader will be available for pre-order from Borders starting September 15th. The company also has good news for those who prefer tablet devices, as the Cruz Tablet will also be on offer for pre-order from Borders starting from October 15th. Prices as announced now stand at $199 for the e-reader and $299 for the tablet.

Complete details are yet to come by though what is known is that the e-reader will have a 7 inch screen and will be similar to the Pandigital Novel in that the Cruz e-reader will be a multimedia device that will allow its users to watch movies, pictures, or listen to music as well as surfing the net. All this while the device is being marketed as an e-reader. Just as Pandigital is still doing with its Novel.

The new Cruz e-reader runs the Android OS, version 2.0 and has tied up with the recently launched Borders’ online e-book store as the official content provider. However, users won’t have access to the Android Market Place and will have to depend on the Cruz market instead.