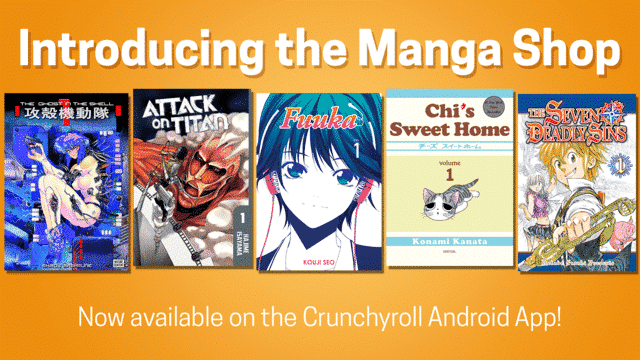 Crunchyroll is best known for their anime and live drama streaming video platform and they have just introduced a new digital manga store on their Android app. They are offering 800 EPUB 3 e-books from Kodansha Comics and Vertical Comics.

With the existing Anime app there is a new manga store that offers hot properties such as Attack on Titan, Fairy Tail, The Seven Deadly Sins, Knights of Sidonia, Welcome to the Ballroom, The Ghost in the Shell, Noragami: Stray God, Devils’ Line, Fuuka, Chi’s Sweet Home and a ton of others.

I think it is interesting that Crunchyroll has two different manga verticles, which is going to split their audience. They already have a Crunchyroll Manga App, but all of their content is free as long as you have a paid anime subscription. Users are rightfully complaining that the manga app hasn’t been updated since early 2015 and are wondering if the old app is going to be phased out shortly. I doubt many users who already do business with other companies will switch to Crunchyroll just for their new manga section. People are fairly loyal to their favorite ecosystem, whether it’s from 3rd party aggregators like Manga Rock or doing business with Amazon and receiving same day delivery or getting an additional 30% percent off on pre orders.