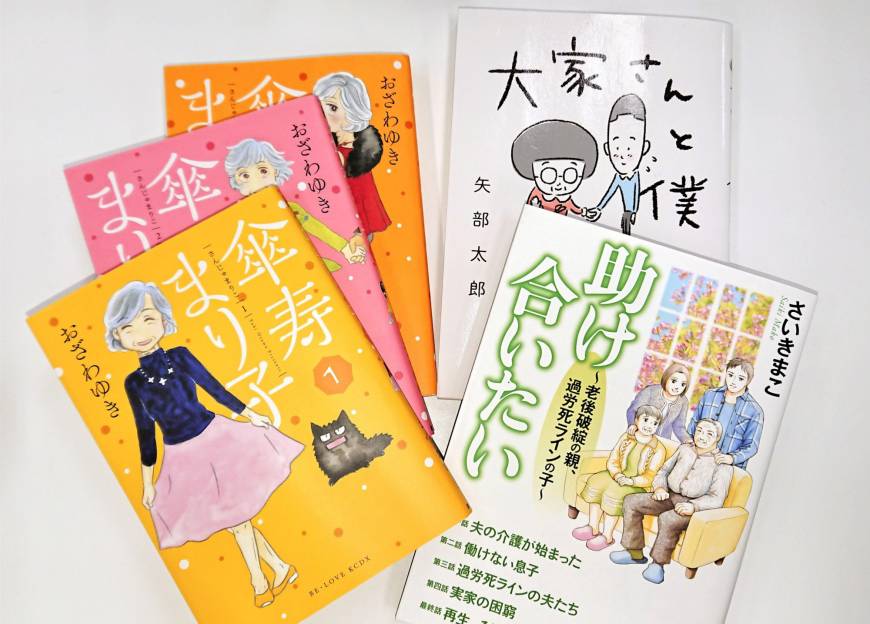 The big new trend in digital manga and print is elderly people. Many publishers and independent artists are incorporating people between 60 and 80 as leading characters. The popularity of these characters reflect anxieties shared by all people about how to make post-retirement life meaningful and cope with nursing care and other issues unavoidable in old age.

“Sanju Mariko” is a story about Mariko, a widow and writer who at the age of sanju, Japanese for 80, sets out from the home she has shared with her son, his wife and extended family, including her great-grandchild. Her new life begins as an “internet cafe refugee” after she is unable to secure other accommodations.

The decision to leave home is prompted by a feeling of alienation brought on by disagreements with her family over a plan to rebuild the house she had thought would be her final home, as well as a sense of loneliness after learning that a friend has died alone. She even ponders whether her family is hoping that she’ll die soon. This manga has sold over 250,000 copies in print and digital editions.

Oya-san to Boku is another popular comic book in the genre, based on the life experiences of Taro Yabe, a 41-year-old comedian who lodges on the second floor of a house in Tokyo owned by a woman in her late 80s. The landlady divorced when she was young and lives alone in the house until Yabe moves in. The two develop a warm and personal relationship. This manga has developed a large following with over 410,000 units sold.

Senior women are also featuring in fantasy manga in the guise of young girls. “Sumikasumire” (a made-up word from the names of the two main characters) by Mitsuba Takanashi tells of a 60-year-old woman turned into a 17-year-old teen. After a life spent caring for her parents without ever having held a guy’s hand, she finally gets the chance to enjoy her youth. “The lack of innocence in high school girls today makes this manga interesting and readers a little envious [of yesteryear],” the publisher said.

The National Institute of Population and Social Security Research projects that households headed by people 65 or older will account for 44.2 per cent by 2040, up from 36 per cent in 2015.

“Manga magazines have changed in content along with the aging of generations who were acquainted with them in childhood,” said Kyoko Tominaga, an associate professor of sociology at Ritsumeikan University.

“Featuring the elderly as leading characters, rather than in supporting roles, has shed light on details of what they worry about and struggle with,” she said. “I think it is the concreteness of this content that allows readers to empathize.”

Manga editors agree that the popularity of the genre is due largely to middle-aged and elderly readers, who are not big fans of manga. For manga writers, this is a new market and it looks like the elderly trend is going to be quite popular for the next few years.