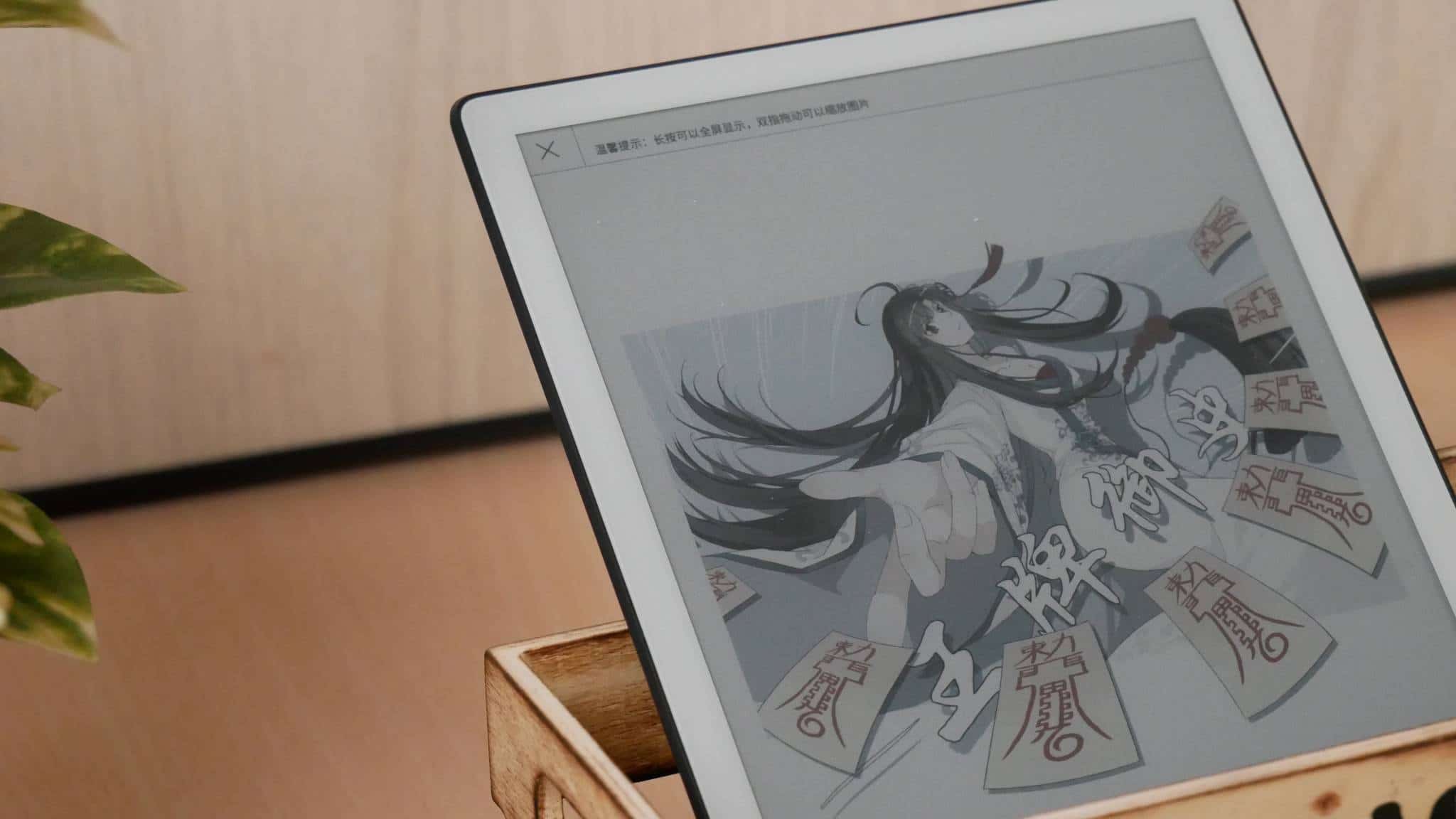 The Bigme S3 is a brand new 7.8 inch e-reader and e-note that is using the E INK Kaleido Plus color e-paper screen. This device is localized for the Chinese market, so all of the preinstalled Android apps and UI is entirely in Chinese and there are no options to change it to something else. So this device is primarily aimed at this audience, although since it has wide availability, it can be ordered anywhere in the world. You will get value out of the S3 if you want to take notes using 8 different colors or edit PDF files. One of the big benefits of the Bigme, is that it has long battery life, so you only need to charge it every couple of weeks and can easily use it outside. The Bigme S3 is expensive, since the company is relatively new. It retails for $899, exclusively available from the Good e-Reader Store. 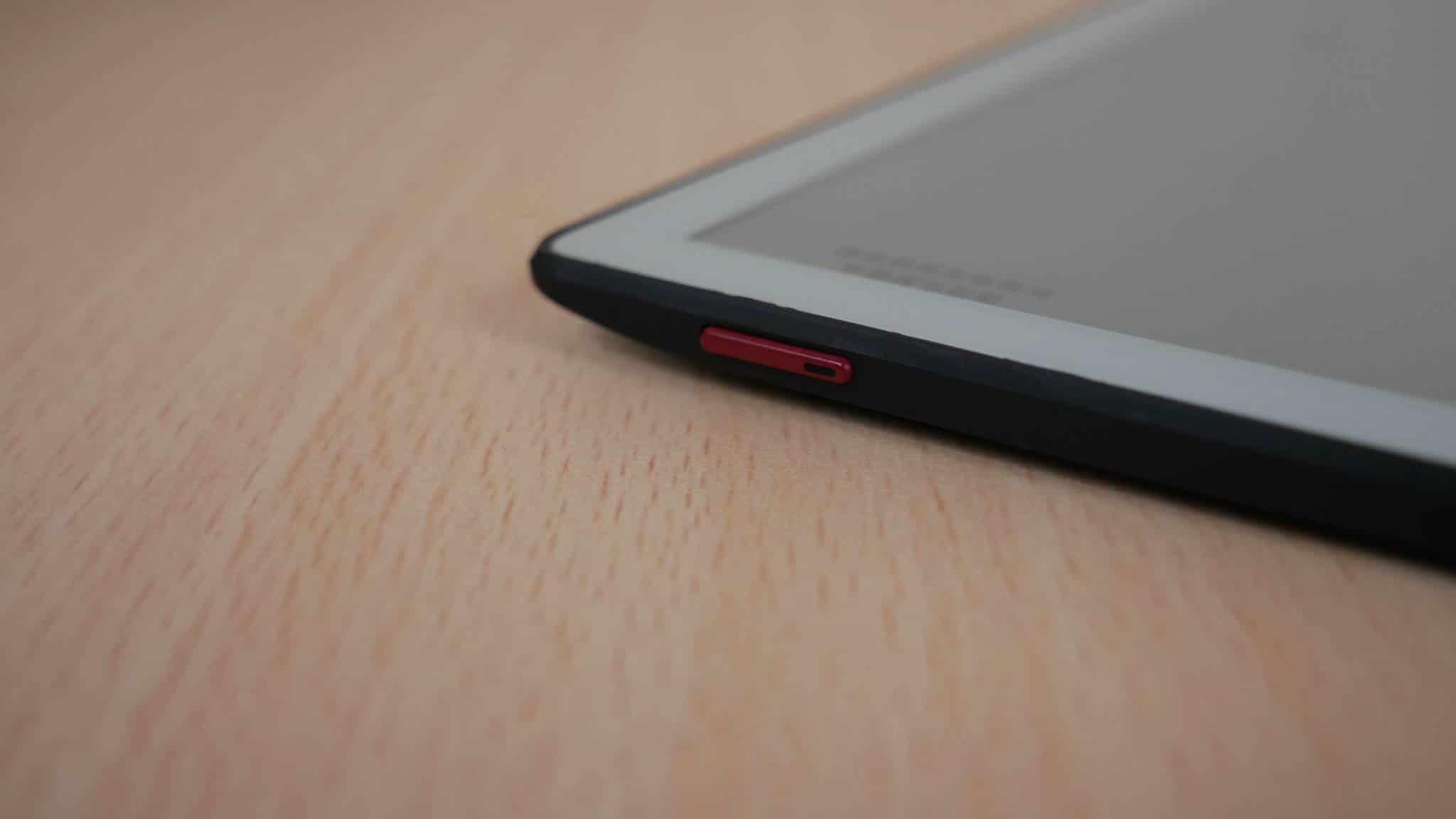 The Bigme S3 features a 7.8 inch E INK Carta HD display and an E INK Kaleido Plus color filter array. The B&W screen is capable of displaying 16 levels of grayscale and has a resolution of 1872×1404 with 300 PPI and the color screen is 624×468 with 100 PPI, it is capable of displaying over 4,096 different colors. It has a front-lit display to read at night and has 18 white LED lights.

Underneath the hood is an quadcore 1.82Ghz processor, 2GB of RAM and 32GB of internal storage. It uses USB-C for connecting to devices and charge its 2000 mAh battery. It has a gravity sensor, dual microphone array and WIFI. Its dimensions are 190.8 x 135.8 x 6.3mm and the device weighs about 220g. It includes a pen that can be used for note-taking and drawing that also functions as a page turner.

The color scheme of the S3 has white stone along the edges  of the bezel and a black stripe at the bottom, which has the Bigme logo. The back of the device has the same piano black finish. There is a power button on the top, a USB-C port on the bottom and two stereo speakers. Given that this is an e-note, and users can freehand draw, take notes, edit PDF files, it comes with a very unique stylus. You can draw in eight different colors, the screen has palm rejection technology. The pen has 4,096 degrees of pressure sensitivity, which means the lighter or harder you press, the thicker/thinner the lines will become. Many pens for Wacom screens are battery free, but not the Bigme one. The top of the pen is removable, with a USB port, you can connect up a USB cable to your MAC/PC and charge it. The cap is magnetic, so it is easy to remove. The design of the pen is grey, it has a power button to turn on or off, helps conserve battery life. It also has a back, forward and eraser button on the sides.

The Bigme S3 is the second e-reader and e-note, the first one was the 10.3 inch Bigme B1 Pro, that employed the first generation E INK Kaleido color technology. The S3 is pocket friendly, displays more vibrant colors and a wider gamut, although it lacks a cellular connection that its bigger brother has. 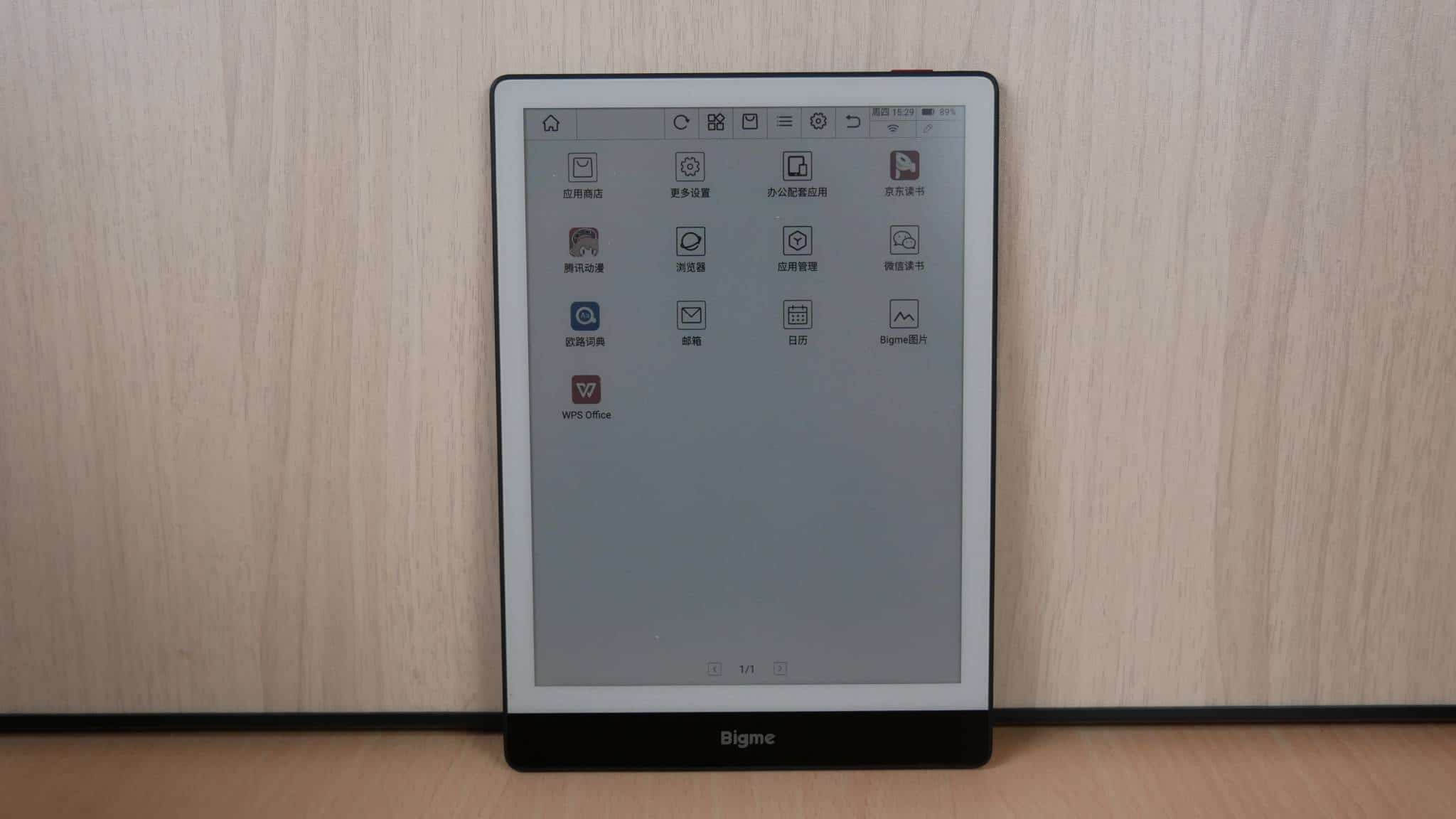 The Bigme S3 is running Google Android 8.1 and the device has its own launcher, which removes many of the standard Android settings. There is no way to switch this to English. Over the course of the review we tried replacing the stock launcher with Nova Launcher, Microsoft Launcher and a few others, and nothing worked. We also tried installing various settings.apk files that gave you the full stock Android experience and this did not work either. Tapping rapidly on the build number, did not unlock any extended developer options. Since this is a very new device, there isn’t any hacks available, but there should be soon.

During the setup process, it is going to ask you to authenticate the device with a Chinese phone number for a two step verification and then it never asks you for it again. This is would normally be a huge problem for users in North America or Europe, that obviously do not have a phone number in China,  but there are free services out there that make it easy. They are basically free SMS services that allow you to respond to a callback with a 4 digit code.

There is a small app store that ships with the Bigme, but only Chinese ones. The vast majority of users will have to content with sideloading apps from other app markets, such as Apkmirror.com or use the Good e-Reader App Store. There is no restrictions in loading in your own content, so this is good news for people who want to install Overdrive, Kobo, Amazon, Moon+ reader, Comixology, PressReader or anything else.  We did not attempt to load Google Apps on this device, but if you buy one, you can attempt to load in Gapps, which is an open source library that gives you the Google Play Framework and the Google Play Store.

The main home screen comprises of a UI that is on the left side and lists all of the icons. This includes the note taking app, library, office (which houses your word and excel, powerpoint docs) Wechat, file manager, cloud storage, dictionary, apps and settings. On the very top, there is also a persistent horizontal bar with a few options. There is a home button, settings, WIFI manager, battery life and a stylus icon. 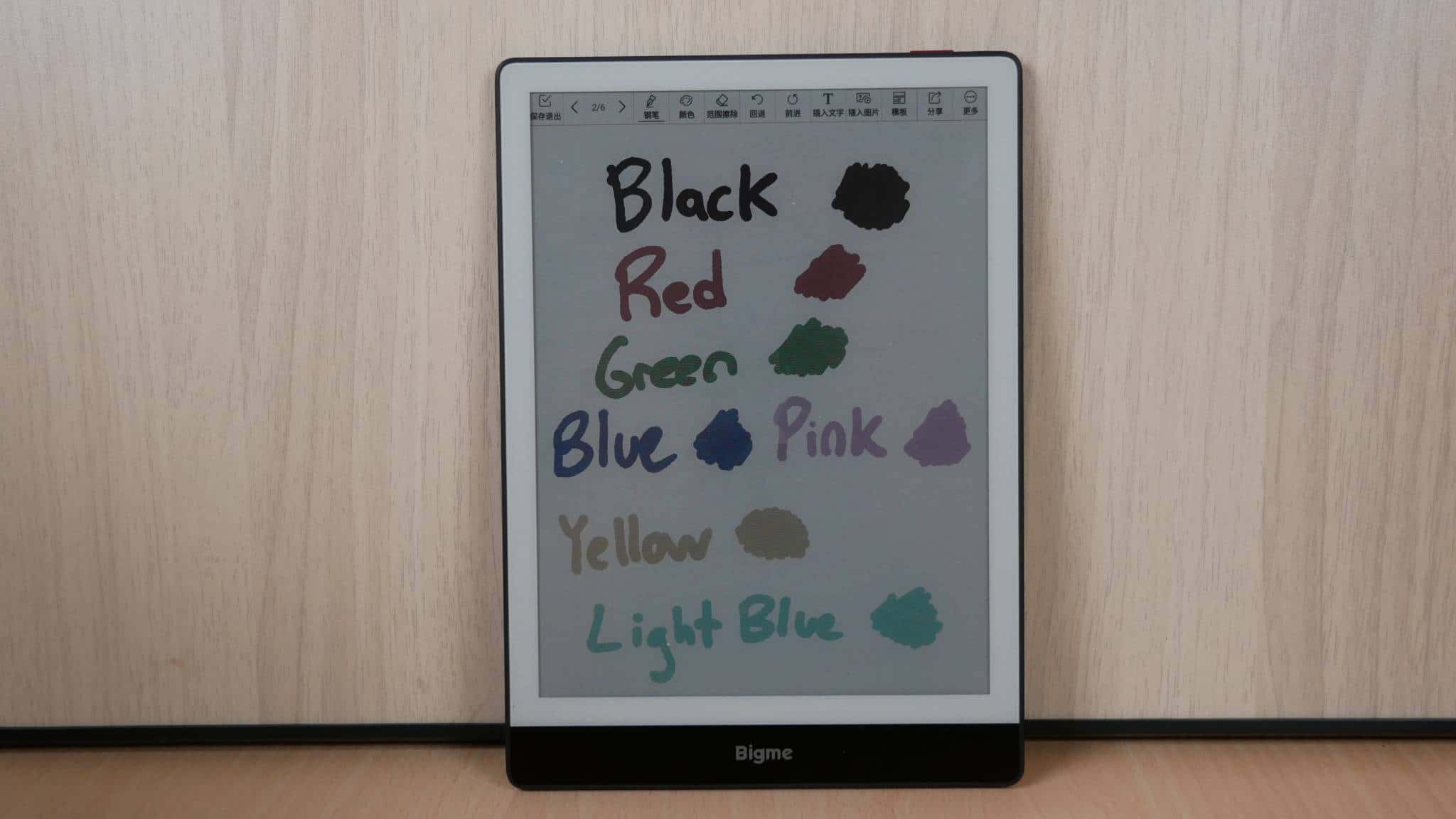 Primarily you are buying this device to take notes and draw in color. There are numerous colors to choose from, red, green, blue, yellow, black, pink, white and cyan. I wish they would have allowed you to create your own colors with a palette or being able to enter your own hex values. A new company like Bigme, I will give a pass, but when Onyx eventually releases something, they will really have to give artists options for an expanded range of colors. After all, what is the point of being able to support four thousand colors, if you can’t take advantage of them when drawing. 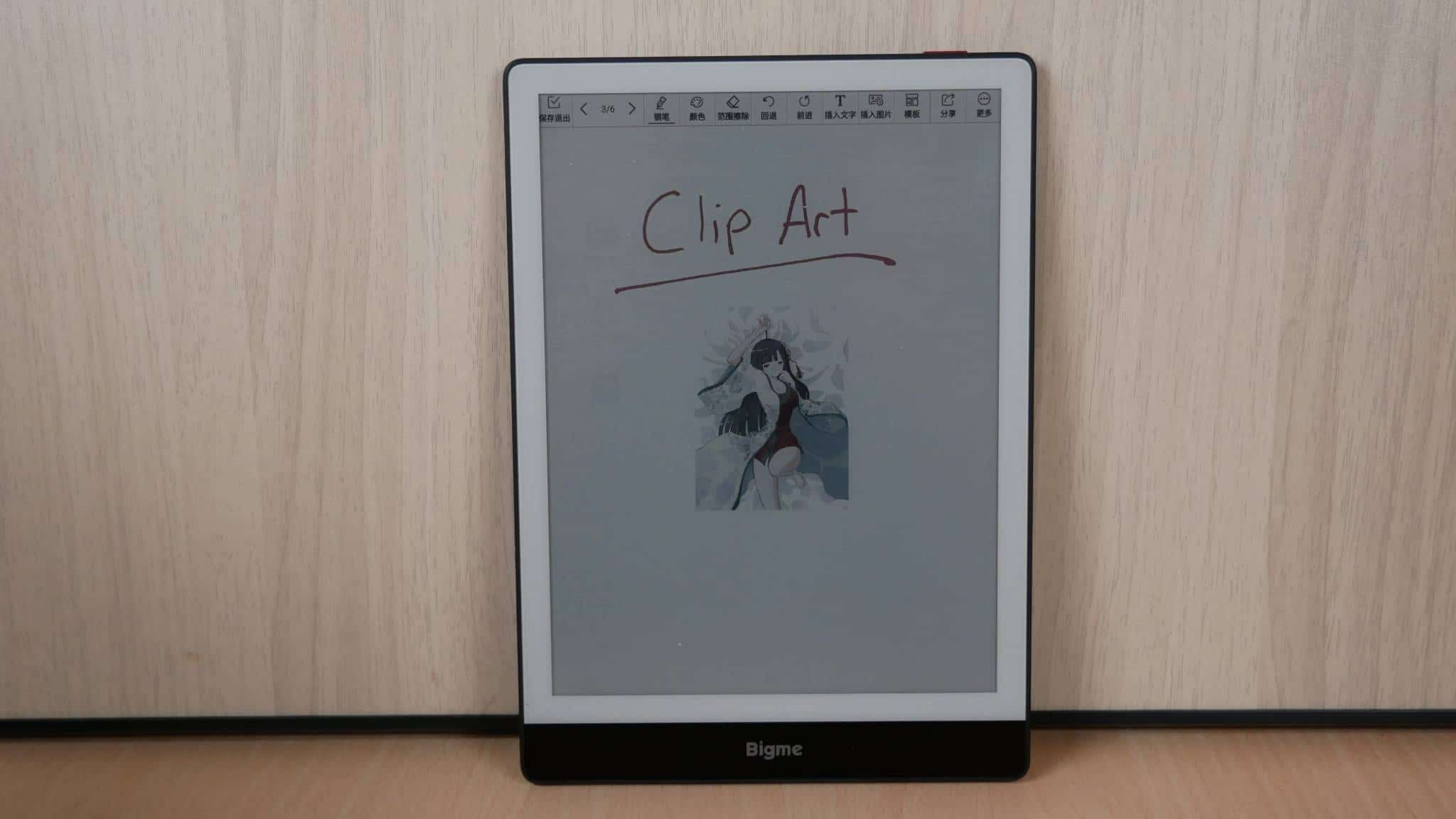 You have three different tools to draw with, a pen, pencil and paintbrush. Each one has a few options for thick or thin lines, and these can set the stage for drawing the stylus, which again has pressure sensitivity. There is support for importing in your own images or clipart, there are various eraser settings, such as area of effect, full screen or use the eraser button on the stylus. You can load in clipart or images and import them.

Drawing on the screen is quick and responsive, the latency is really low. I think this is because of the WACOM screen and powered Wacom pen. There is no discernable lag or lines taking a second or two to appear. This will appeal towards artists or designers.

When it comes to reading ebooks, there is a stock app that has support for many of the most popular formats, such as EPUB and MOBI. It also has support for Microsoft office docs, txt, CBR and CBZ. You can sideload in your own ebooks or PDF files. For example, as an native english speaker, I can sideload in my entire collection of sci-fi novels onto the S3 and read them in English, ditto with PDF files.

Reading is very good, page turn speed is fairly robust, there is little to no ghosting. Editing PDF files gives you the same options as the note taking experience. So if you are looking for a great e-note for school, to read journals or textbooks, this would be good, same if your job requires you to find an alternative to read paper. 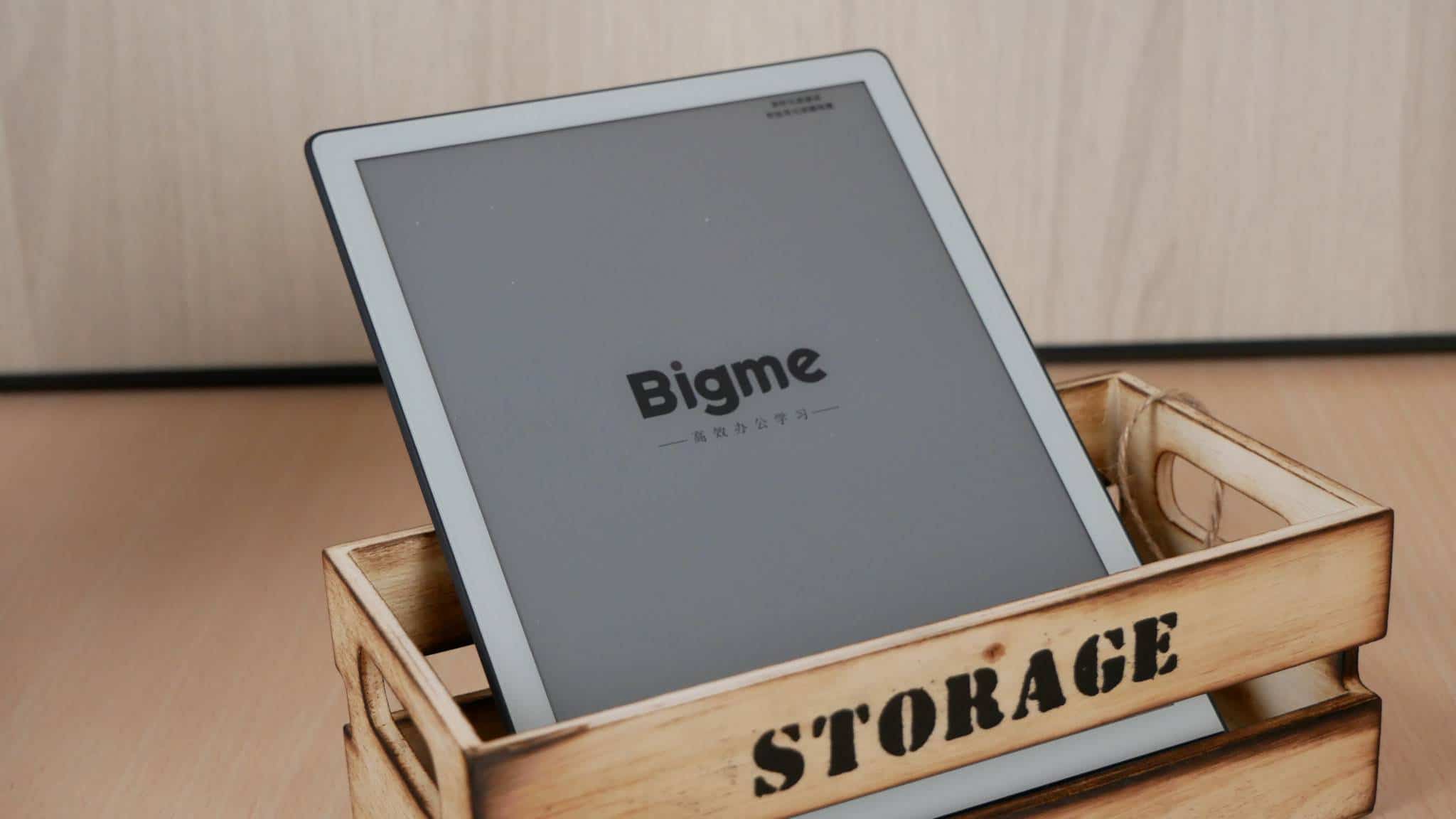 I would recommend the Bigme S3 for very specific users. This includes technophiles who love E INK technology and want to see how Bigme  approaches freehand drawing or taking notes in color, in addition to the physical construction of the device. This device might also be ideal for people who want to sideload in their own content, or want to install apps, in whatever language they want. Finally, this device will see lots of value for people whose primary language is Chinese, but live in other countries, outside of China. I live in British Columbia and there is a huge Chinese speaking population spread throughout the lower mainland, students could use the Bigme attending high school, college or university. Read all of their textbooks, edit PDF files or even replay lectures.