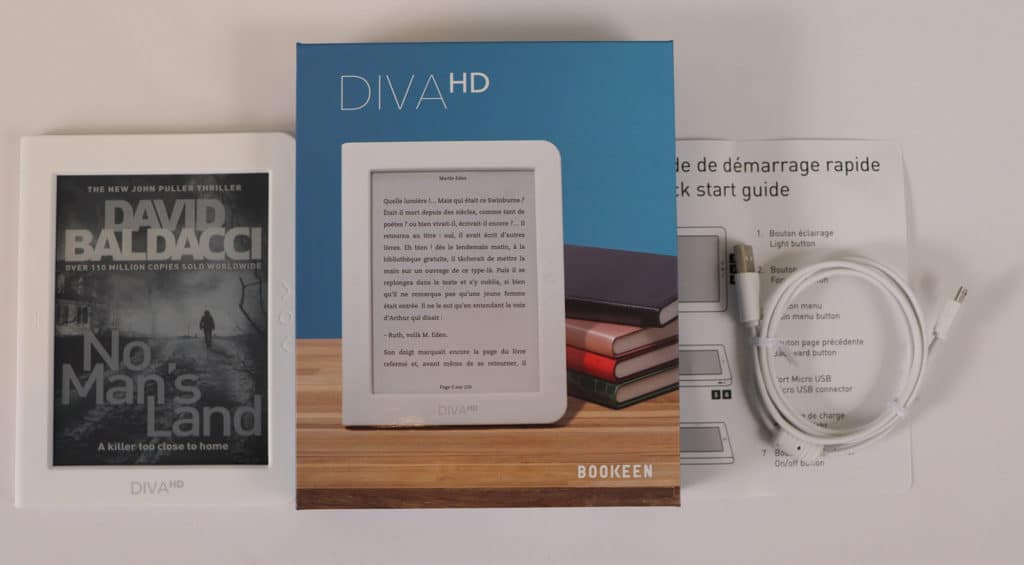 The Bookeen Diva HD is the first e-reader that the French company has released in 2020. They have redesigned this latest generation product from previous offerings, such as the Saga and Ocean. It has a plastic design on the front, but unlike hard, rigid plastic that is on the sides of the bezels on the vast majority of e-readers, this one can be pressed down and has lots of give. In this unboxing video we take a look at everything that comes inside the box, evaluate the retail packaging and give you a first look at the industrial design.

The retail packaging on the Diva HD is very warm and features a huge picture on the front, that shows off the e-reader and there is razor sharp text displayed on it. Next to the e-reader, is a few books that are piled atop of each other, to give more color. On 3 sides of the box is the name of the e-reader and the final side has some information, such as it being assembled in China, UPC and certification from various regulatory bodies. On the back of the box is more full color imagery. They list some of the most compelling specs, with icons next to them. They talk about the 300 PPI screen, room for 15,000 ebooks, weeks of battery life, warm light feature, gyroscope and the smart cover. There is also some PR lifestyle imagery underneath, which shows the e-reader being used outdoors, indoors and some closeups. The back of the box is all in French.

Inside of the box is the e-reader, a quick start guide and a USB cable that is housed in a small box. The quick start guide basically shows you where the physical page turn buttons are, how to turn on the front-lit display and where the USB port is, to charge it. The USB cable itself is firm and rigid, and is white, the same color as the e-reader.

The design of the Bookeen Diva HD is quite interesting, I think it looks like a bar of soap. The color is all white. On the front of the e-reader, and all along the bezels is a very soft plastic, that has lots of give when you press down on it, it makes holding it, very pleasurable. There are two physical page turn buttons on the right, and a glowlight button on the left. On the bottom is the DIVA HD logo and on the very bottom of the device is the USB port. Other than that, the e-reader is very clean and minimalist.

I think Bookeen did a good job with the industrial design, it really doesn’t look like anything else on the market, which was their attention. Rather than a plain black e-reader, which is what everyone else is doing, they took a risk with an all white design.

The Diva HD is currently retailing for €129.90 from the Bookween website and they ship worldwide.