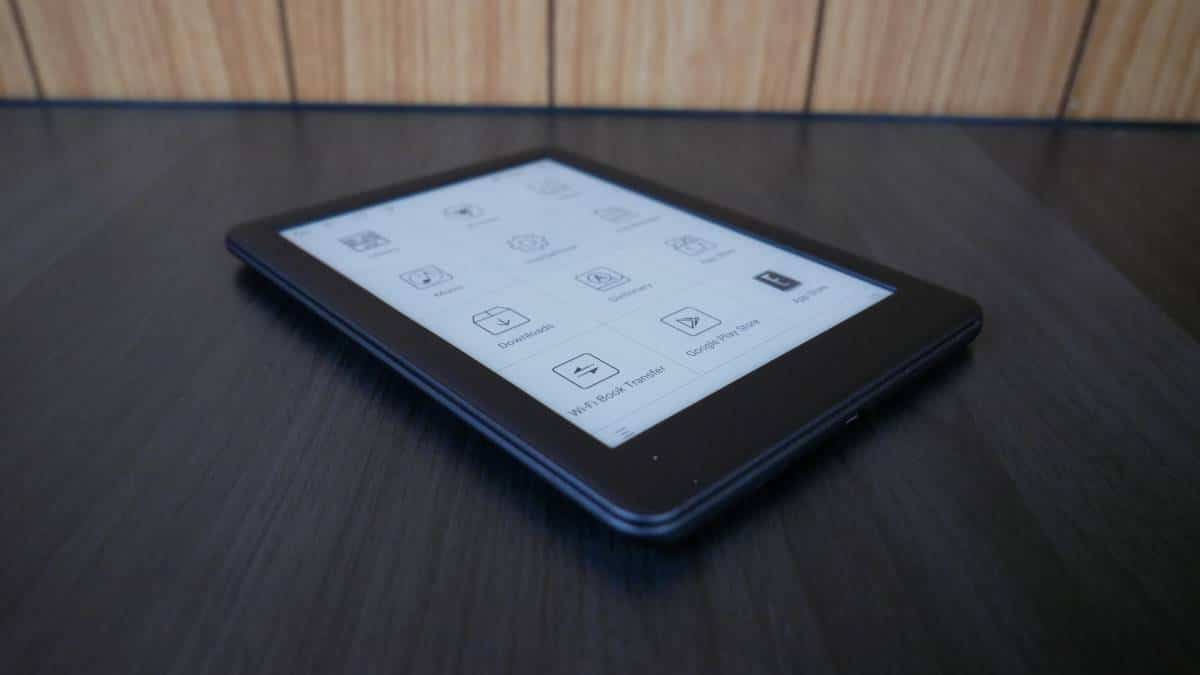 Boyue took a break from releasing digital note taking devices in 2020. They focused on the software side of things, making good on their promise to upgrade their older devices from Google Android 6.0 to 8.1. I did not expect the company would release any new hardware, but was pleasantly surprised when they unveiled the Likebook P6, at the of December. This entry level e-reader is completing against the Kindle Basic, Kobo Nia and Barnes and Noble Nook Glowlight 3. The big advantage of the P6, is that it has Android 8.1 and full access to the Google Play Store, this gives users the ability to choose what bookstore they want to do business with and not be forced into dealing with just one. It also opens up a wide array of comics, magazines, manga or newspapers. 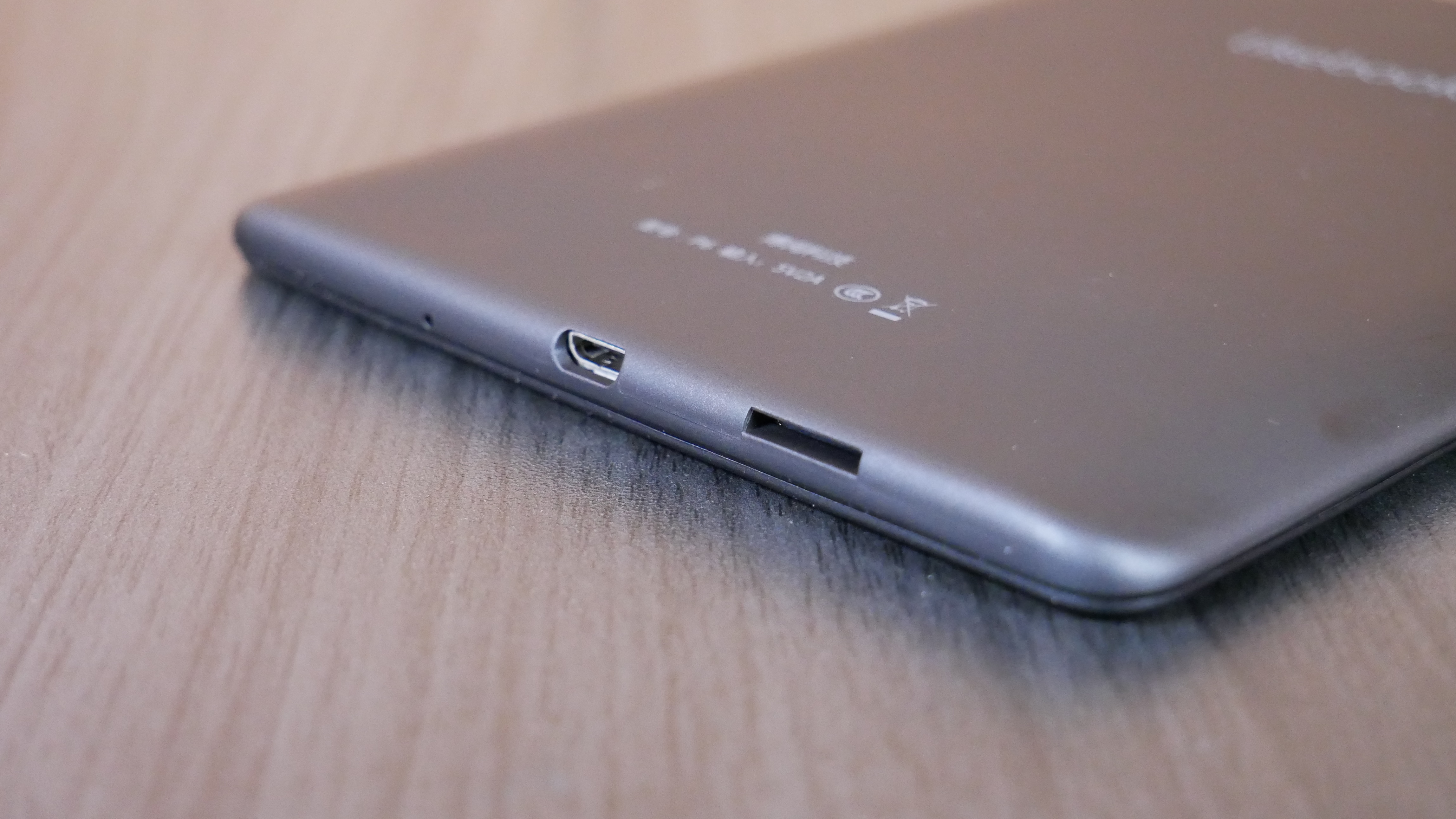 The Likebook P6 features a 6 inch E INK Carta HD display with a resolution of 1448×1072 with 300 PPI. The screen is flush with the bezel and there is a layer of glass. The bezels along the side are fairly big and chunky, the overall color scheme is piano black. The back of the device has the Likebook logo in gold. There is no physical page turn buttons or a home button, everything that is software driven.

This device is geared towards not only reading during the day, but also night. It has a front-lit display with 24 LED lights, that are underneath the layer of glass and project light evenly across the screen. There are no splotches or grey areas where the light does not cover. This is the most white LED lights I have ever seen in a six inch e-reader.

Underneath the hood is a quad core 1.6 GHZ processor, 1GB of RAM and 16GB of internal storage. If you wish to have more storage, it does have an SD card slot, capable of an additional 128GB. Boyue is one of the few companies that continue to have an SD card in all of their devices, almost everyone else has abandoned expandable storage.

It has Bluetooth 5.1 and this gives you the ability to plugin a pair of wireless headphones or earbuds. It even has support for wireless speakers too. This is great for audiobooks, music, podcasts, TTS or anything that has audio. You can access the internet with WIFI and has a Micro USB port, instead of USB-C.  You can use the P6 for a couple of weeks, before you have to recharge, thanks to the 1,750 mAh battery. The dimensions are 152mm by 113mm by 8mm and weighs 165g.

The Likebook P6 is minimalist and if you put it side by side with a dozen other e-readers that have an all black color scheme, it would not really stand out. I believe that on a pure hardware level, the specs are better than most other entry level e-readers, such as the Kindle, Kobo or Nook, these only have a single core processor and you have pay extra for internal storage. This also has an SD card, to expand it further. The front-lit display puts all of these other models to shame. 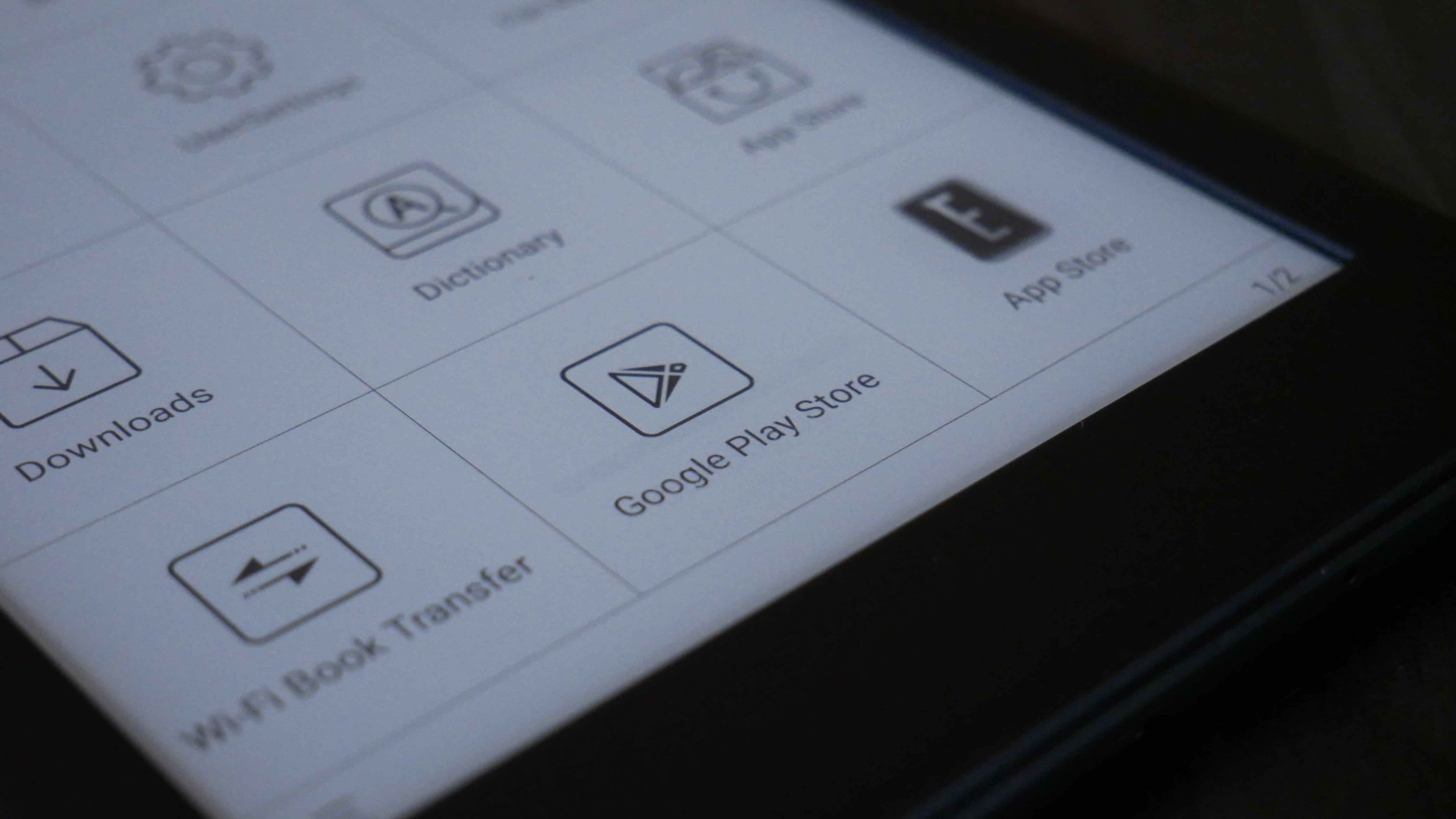 The Likebook P6 is running Google Android 8.1 out of the box. This gives you full access to Google Play, that requires hardly any tweaks or other software that needs to be installed. You can basically get going right away by attaching your Google Account in the settings menu and login. Onyx Boox is the only other brand that has Google Play on all of their e-readers and e-notes, so if Play is important, these are the only two that support it out of the box.

Boyue has revised their home screen on this model. It has bright and bubbly boxes, which you click on with your finger to launch various functionality. I think this is a good move, because other six inch models basically use the same UI as their larger models. Often times the navigation bar is too small, and the logos are hard to read. Boyue has done a great job at revising everything to suit a smaller screen, and should be commended.

The main home screen comprises of 8 boxes. There is a setting to to expand the boxes, to fit even more on the screen or less. There is an option in the settings menu to adjust the homescreen. So you can remove the ones you don’t normally use and keep the ones you do. For example, I don’t often visit the gallery or downloads, so I removed them from the home screen and instead have shortcuts to launch the Kindle app and Comixology.

The stock options on the home screen out of the box is  library, internet browser (webkit), gallery, music player, settings, file manager , downloads, dictionary and apps. On the top left, there is the home screen button, back button, refresh and front-lit display option to control the luminosity. On the top right is an option to view all of the open apps and background processes, WIFI connectivity symbol, battery life remaining and a clock. 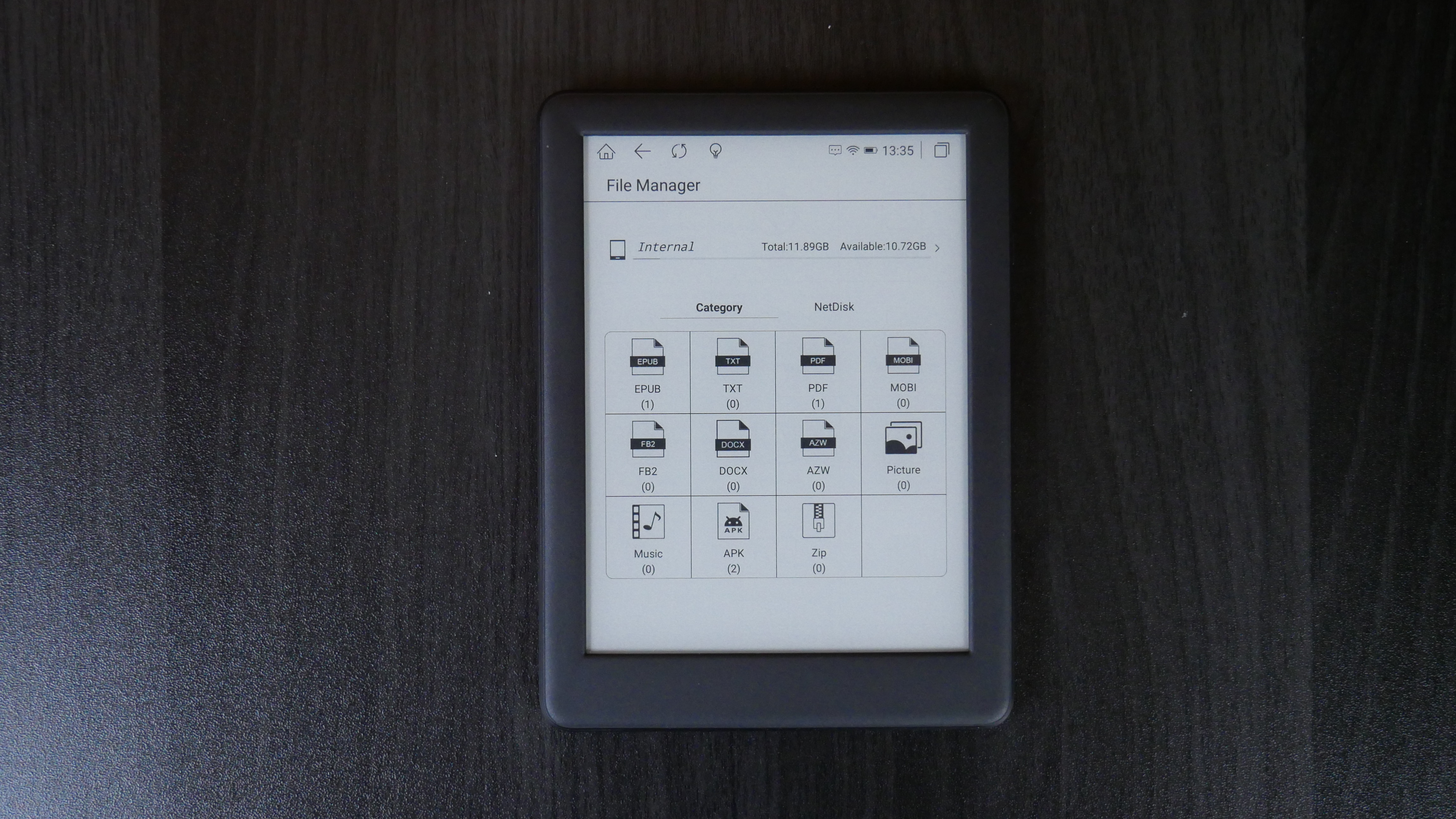 One of the things I like about the UI/software is the new file manager. If you sideload things onto the root directly, it will break everything down. It will show you how many EPUB ebooks you have, and group them, showing a numerical value. Ditto with txt files, PDFS, Mobis, DOCX, ZIP, APKS, Pictures, and virtually every ebook format the device supports.

There are a few global options that will allow you to craft the Boyue P6 to your liking. If you drag your finger from the top/center downwards you will get a few options. You can adjust the global contrast, to make everything darker or lighter, in terms of the text and menus. There is also an A2 mode, which will degrade image quality, while increasing system performance. This is great if you are running apps, with complicated animations, such as page turns. I find A2 mode is great for browsing or doing anything that isn’t image heavy.

Overall, the software performance on the Likebook is great. Google Play is a bit slow, because there are so many different animations, while you slide and navigate around. You will definitely want to engage in A2 mode, in other to view and download apps. Browsing around the e-reader, adjusting settings, establishing a WIFI network or connecting up Bluetooth headphones is super easy. I think most people are going to be impressed on what Boyue as done with the P6, it looks and feels unlike any other e-reader they have ever made. 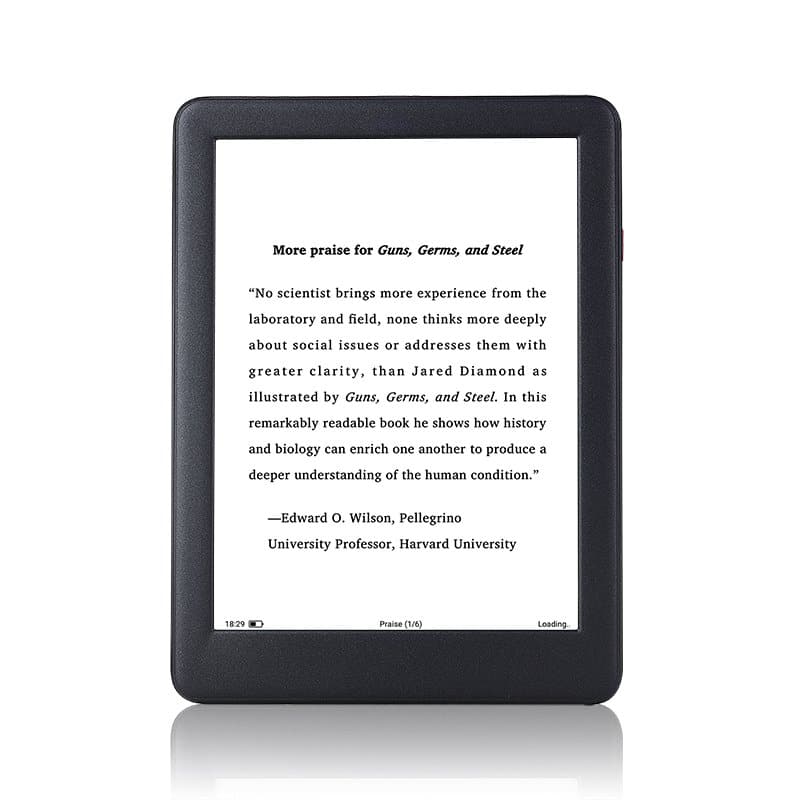 Boyue has completely revised their stock e-reading app. They are using the latest version of Z-Reader. This supports a myriad of ebook formats, such as TXT, CHM, FB2, MOBI, HTML, RTF, HTXT, EPUB, PDB, DOC, PRC, PDF, DJVU, ASW, PRC. Boyue will release a firmware update sometime in the future and it will be able to support CBZ/CBR, which are the two most popular manga formats.

Reading on the P6 is great. If you have an extensive collection of ebooks on an SD card, it is as simple as just plugging it in and you can just start reading. Alternatively, if you have content stored on Google Drive, Dropbox or anywhere else, you can just install that app and download the material.

The e-reading app is fairly standard fare. You can adjust line spaces, margins, font size, font type and a number of other things. You can choose what dictionary you want or download additional ones. Page turns are lightning quick, via taps or gestures.

I am sure many people do not have a collection of ebooks on their computers or laptops, it is only a small minority of people that back everything up, strip out the DRM and load it on whatever ereader they are using at the same. Most, are invested in one particular ecosystem, or sometimes multiple. Let’s say the first few e-readers you had were from Amazon, you purchased a bunch of books and for whatever reason you switched to another brand, such as Kobo. So you have two different collections, in two different ecosystems, so this creates problems. With the P6, you can just install the Kindle App and the Kobo app at the same time and read to your heart’s content. This is one of the primary advantages of an Android e-reader with an E INK screen. You are not locked into anything, you have utter and complete freedom to craft your own experience. 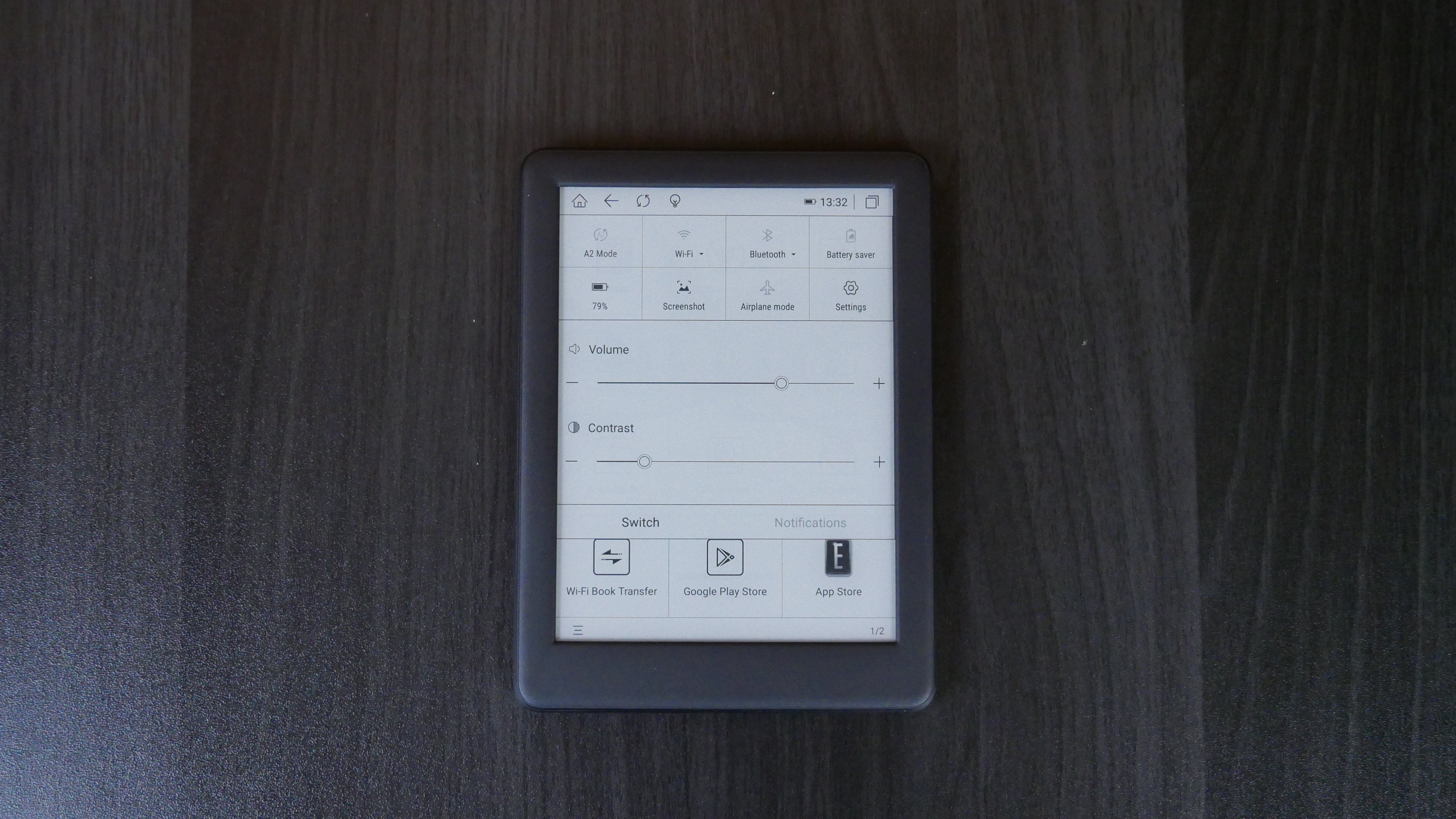 I believe the Boyue Likebook P6 has tremendous value. The launch price is $139, but the sale price is $129. This makes it the most affordable Android driven E INK reader in the world. I would really recommend this for anyone that wants an Android device, but doesn’t want to spend over $200 to get one. I feel the only better one than this is the Onyx Boox Poke 3, which has Android 10 and comparable specs and this model costs $189.