Even before the Kindle 2 launched, there was talk of an even newer, larger digital reader from Amazon that would be geared more toward reading textbooks and periodicals. We all assumed it would be bigger, but it was unclear exactly what form it would take. Well, now that it’s finally arrived, what is a little surprising is how much the Kindle DX–bigger face aside–is a dead ringer for its little sibling.

In profile, the two devices appear equally svelte: the 0.38-inch-deep DX is just a tad thicker than the 0.36-inch Kindle 2. Obviously, the big difference here is the Kindle DX’s 9.7-inch e-ink display (1,200×824-pixel resolution), which technically offers 2.5 times more screen real estate than the Kindle’s 6-inch display. That extra screen comes at a price, both figuratively and literally, as the DX weighs almost twice as much (18.9 ounces) as the Kindle 2 and costs $130 more, at $489.

That said, while the DX is significantly larger and heavier, it doesn’t feel too burdensome to carry or hold. However, it clearly isn’t as portable as the Kindle 2; its larger footprint requires a larger bag or briefcase for stowaway purposes. Most women’s handbags, for instance, just won’t be big enough to contain the thing. 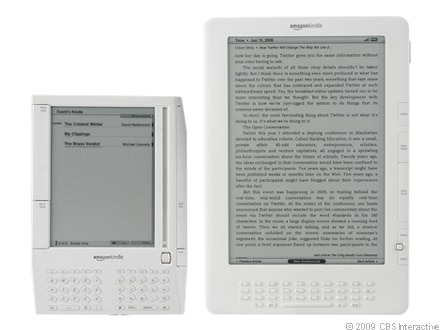 The Kindle DX (right) is considerably larger than the earlier, smaller Kindle models.

Amazon says the DX’s screen technology and guts (i.e., processor) are exactly the same as what you get with the Kindle 2. The DX comes with more memory: 4GB (3.3 usable) of internal memory, compared with 2GB for the Kindle 2 (neither the DX nor the Kindle 2 has an expansion slot for more memory, like the original Kindle had). That’s enough memory to store 3,500 books, according to Amazon. If you run out of space, however, you can delete titles from the Kindle and then later redownload previously purchased books in under a minute, free of charge.

The DX also features a built-in QWERTY keyboard for taking notes, entering search terms when wirelessly accessing the Kindle Store, and typing out URLs in the rudimentary Web browser. Like the Kindle 2, the DX’s rechargeable battery is sealed into the unit (read: nonremovable) and delivers about two weeks of battery life if you use the built-in 3G wireless data connection judiciously. If your battery dies, you have to send the device back to Amazon to replace the battery for a fee.

Aside from the expanded memory, the two most important feature additions to the new Kindle are native PDF support and the capability to go from portrait to landscape mode by simply rotating the device. Additionally, you can now adjust not only the font size but how many words you want to see on a line of text. And finally, the Web browser is slightly improved (I’ll get to that in a minute).

As advertised, the larger screen lends itself to displaying newspaper and magazine content, especially when you throw some graphics and images into the mix. You see more of the story on a single page and the reading experience is a little more akin to reading an actual newspaper. However, the newspaper/magazine reading experience isn’t dramatically changed from reading newspapers on the Kindle 2. 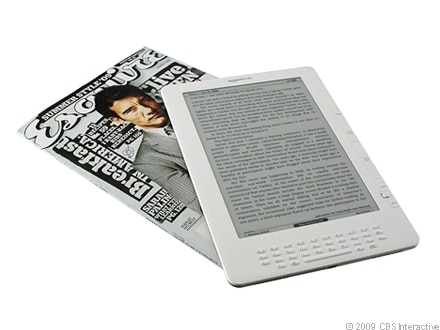 The Kindle DX is designed to mimic the design of traditional periodicals.

When it comes to textbooks, the Kindle does a good job of displaying graphics and charts (alas, there’s no color–only 16 shades of gray), so complex layouts with multiple images end up displaying more or less as they would in a textbook. And obviously, the Kindle DX weighs far less than an organic-chemistry textbook, which is why this device will appeal to students hoping to lighten their backpack loads.

Amazon didn’t make a big deal about the capability to add notes and highlight sentences and passages as you’re reading, because that functionality was built into previous Kindles along with a built-in dictionary and keyboard. Ideally, of course, the Kindle DX would be a touch-screen model, and you could mark up the “pages” themselves by writing on the screen. You can, however, access those notes on any Web browser.

Another nice convenience: if you have multiple Kindles on a single account–or, more likely, if you’re running Amazon’s free Kindle App on your iPhone or iPod Touch–all of your content will be synced up. Stop reading a book on Page 116 on the DX, and when you pull it up on the iPhone, it’ll resume at that point.

About those PDF documents: there’s no explicit zoom feature, but switching into landscape (horizontal) mode crops the PDF and essentially enlarges a portion of it. One of the problems with the Kindle is that it doesn’t appear to have the horsepower to properly zoom in and out of PDF files quickly, and thus this horizontal mode is Amazon’s workaround. While it may not offer the most flexibility in terms of viewing options, it’s not bad. One warning: in order to get quick, smooth transitions going from portrait to landscape mode, you have to hold the Kindle DX upright so the screen is facing you at a right-angle. Also, if you’re not careful, you can end up tilting the device and accidentally switching viewing modes. If you have trouble with this, you can set the screen to stay in a fixed vertical or horizontal mode. And you can even choose to flip the screen so it’s upside-down with the keyboard on top. 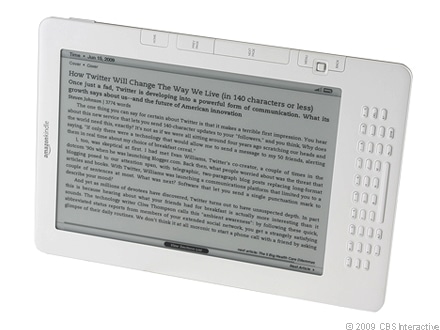 The DX automatically switches to landscape mode when tilted on its side.

We promised more on the Web browser improvements and here it is: you can now switch from a basic mode to an advanced “desktop” mode that allows you to view the Web page as you would on your desktop (you switch into landscape mode to get a wider angle of view). You access this mode while using the browser and hitting the menu button, which reveals the desktop mode option.

As a test, we brought up the CNET home page, and after some lengthy load times and some funky graphical glitches, the page did indeed look more or less like a monochrome version of CNET’s home page. (This model, like previous Kindles, doesn’t offer Flash support and won’t display video). In other words, yeah, it’s improved, but it’s not a huge improvement. Ultimately, the browser still does best with lighter-weight (read: fewer graphics) mobile versions of Web sites that are suitable for viewing on mobile phones. (For now, Amazon is saying that a firmware upgrade will not be available to Kindle 2 owners to add the new browser features or native PDF support).

Small gripes aside, we don’t have any complaints about the feature updates and generally think they’re a nice plus. Of course, some Kindle 2 owners aren’t happy that Amazon didn’t include them in their devices–especially when you consider the DX was launched relatively quickly after the Kindle 2–but such is the cruel reality of a consumer-electronics world in which later products tend to incorporate new features.

All that said, you now have a choice between two different Kindle models, and the big question is whether you should spend the extra dough on the DX or opt for a Kindle 2. In our humble assessment, the majority of buyers will–and probably should–favor the smaller device, the Kindle 2. Why? Well, we have some concerns over the DX being more of a two-handed e-reader; yes, you can hold it in one hand for a short time, but you really need to keep both hands on the device to support its weight. Meanwhile, the Kindle 2 is easier to hold for longer periods of time with just one hand.

The other factor to consider is that when it comes to periodical reading (newspapers and magazines), the advantage of having more text and images on the screen is a nice perk, but the reading experience isn’t enhanced as much as you might think. One problem is that even with the larger screen, you don’t feel like you’re looking at a whole newspaper (or magazine). There’s typically one story per page and you keep hitting the “next page” button to turn pages and get to the next story. Alternatively, you can go to a table of contents and pick from various sections or select from a list of articles within the section. Again, aside from the fact that you’re seeing more text, the overall reading experience is similar on each device. (Note: At the time of this writing, there’s continued talk of reduced subscription rates on certain newspapers such as The New York Times, The Washington Post, and The Boston Globe, but Amazon has yet to offer details on the terms of those reduced rates and we only saw full-price rates advertised in the Kindle Store. For example, The New York Times currently charges $13.99 a month for its Kindle version, but its rate is allegedly supposed to drop to $9.99 with a longer-term subscription).

As for textbook reading, we can see how the Kindle DX would have a distinct advantage over the Kindle 2. Also, for seniors or other sight-challenged folks who want to jack up the font size to the maximum level, reading on the DX is a better experience, because you can get a reasonable amount of text on the page, and the maximum font size is even bigger on the DX than the Kindle 2. With the font set to the highest level on the Kindle 2, we counted 11 lines of text with about five words per sentence. By contrast, on the Kindle DX, we counted 19 lines of text and six or seven words per line. (Note to arthritis sufferers: because the Kindle DX is somewhat weighty, you’ll probably want to prop it up on some sort of reading stand. You can also flip Amazon’s Kindle DX cover around so it becomes an easel, but you’ll have to read in landscape mode for it to work). 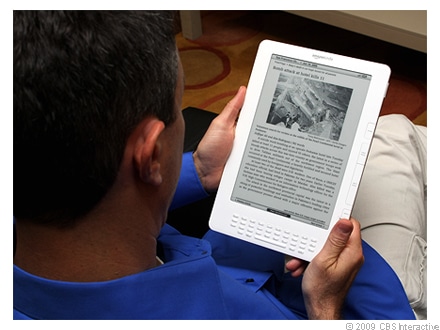 The larger screen makes it easier to read, but the added weight may cause strain during long reading sessions.

The native PDF support is a tough call. Yes, it’s a plus and the Kindle 2 should really have it. Amazon does offer an “experimental” e-mail conversion service that will turn PDFs, as well as JPEG, GIF, PNG, and BMP images, into Amazon’s proprietary AZW format. However, Amazon acknowledges that using this service doesn’t always yield PDFs that display accurately. Bottom line: if you’re planning on storing and viewing a lot of PDFs on your e-reader, the DX is the way to go if you want to stay in the Kindle family. (We wish the Kindles were more open and offered support for other formats such as EPUB files, but, for now, Amazon has chosen to keep its e-reader garden relatively closed.)

Up till now we’ve been talking about the Kindle DX without any regard to price, but obviously its high price tag is one of its biggest shortcomings, and that may limit its appeal in the early going. We do expect that Amazon will figure out a way to subsidize the cost of the device for the one audience it hopes to reach in large numbers: college students. But for the average consumer, $540 (if you include the cost of an optional protective cover, which we actually consider a must-have) is a lot to spend for an e-reader that can easily break if dropped.

That said, there’s undoubtedly a certain segment of buyers out there who won’t mind spending this kind of money on a large format e-reader that offers the core simple-to-use Kindle experience, plus a couple of new features. This reviewer would prefer to carry around the smaller and less expensive Kindle 2, but to some, bigger will always be better–price be damned.