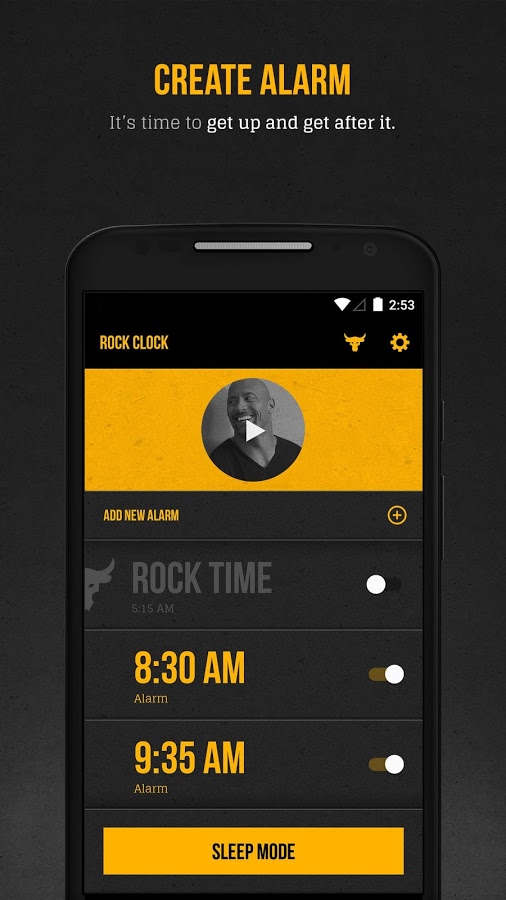 Dwayne the Rock Johnson is one of the highest paid actors in Hollywood and is constantly filming movies and television shows. Famously, he gets up at 4AM everyday because the Rock knows his competition is sleeping “If they’re willin’ to get up at 4, then you bet your ass I’m gettin’ up at 3. And if they’re willin’ to get up at 3am, then well… I’ll be gettin’ up at 2:59.

The Rocks early hours might not be for everyone, but he wants you to at least try. This is the premise behind The Rock Alarm Cloud, a new app for Android and iOS.

This isn’t your average alarm clock with a snooze button and a few music files playing. You can listen to the The Rock sweetly singing and playing guitar, or The Rock saying “beep” over and over. The real perks, however, come in the form of motivational videos and messages The Rock uploads from his own phone every day. When you open the app for the first time, it will ask you if you want to set a specific goal. Once you do, you’ll be greeted with motivating audio clips from The Rock, like “you can do this,” and “Let’s do this” as you set your alarm for the next day. Oh, and there’s no snooze button because The Rock doesn’t believe life has a snooze button. He’s not wrong.