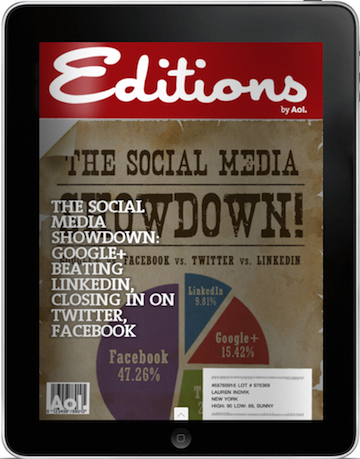 iPad apps such as the Flipboard or Pulse have a new competitor in the form of the Edition from AOL. Now available as a free download from the App store, the Editions is the newest personalized magazine app for the iPad that draws resources from social networking applications, along with a host of other online sources and creates a personalized news stream delivered in a neat magazine style layout everyday to your iPad.

Users will be required to answer a few simple queries pertaining to their likes and dislikes. They will then have to select the categories such as news, technology, sports, arts and culture, and design, based on which the app will automatically pull stories from various online sources, which is unlike The Daily that has its own news source. Also, the Edition will keep a tab on your favorite stories and publications so that it has a clear idea of what type of stories you’d like to read on your iPad. This will also help the app to tailor automatically according to the user’s preferences.

So while the app itself is very customizable, it also displays all original contents which includes the original ads, content, and formatting. The app runs in an in-app browser, but can be slow at times.

Also, another feature of the app is that it is finite in its scope in that the content gets refreshed just once in a day. So its much like the newspaper which pretty much looses its relevance by the end of the day. Also, while the AOL effort in the form of the Edition is quite noteworthy, it also does not break any new grounds as there already are quite a few apps like the Edition, which makes it interesting to see if the Edition can really make a mark.