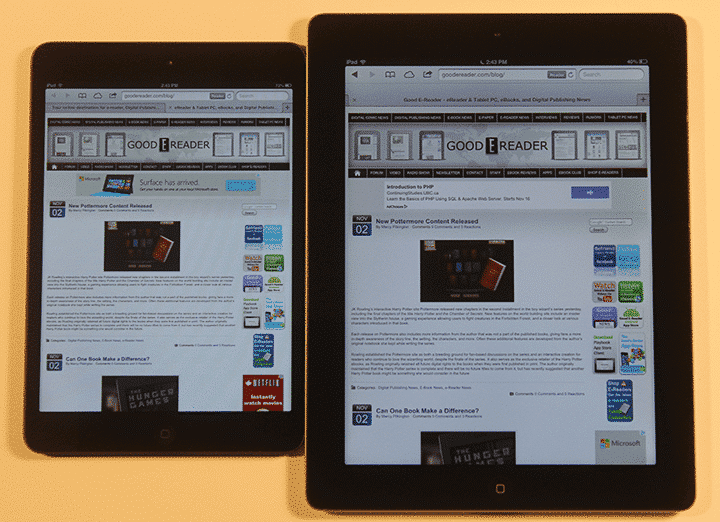 Welcome back to another grand installment of the Good e-Reader Video Comparison Series! Today we check out the Apple iPad with Retina Display (iPad 3) and the NEW iPad Mini! We investigate the core reading experience with comic books, magazines, and ebooks, and then compare the displays of video and the full internet experience. By the end, you should have a strong sense of the iPad Mini’s overall performance, sitting side by side with its bigger brother.

On the whole, there are huge differences between the iPad Mini and the previous model issued in May. To start, the larger screen on the iPad 3 is better suited towards comic books. The higher pixel count allows you to download CMX HD editions, which gives you more vibrant comics. In the video, we put two of the same ones next to each other, so you can witness the difference. The ebook experience is fairly similar because even with the pint sized screen you can just increase the fonts and still get the same content continuity. Magazines also tend to look better on the larger iPad 3, because of the added room for pictures and text. Zinio, Press Reader, and other companies have all issued high-definition content that really makes it shine.

Let’s hear your thoughts! Do you think the Mini is a must buy? It certainly appeals to people who use it outside the home or traveling. The bulky iPad is better suited in the office or an indoor setting.