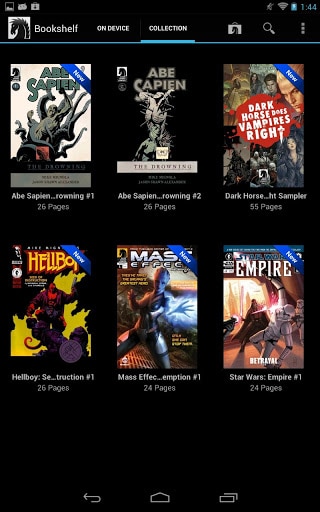 After almost a year of beta testing, the comics publisher Dark Horse launched its Android app this week, bringing Star Wars, Buffy the Vampire Slayer, and Hellboy comics to a new platform.

Dark Horse is the only major non-manga comics publisher to set up its own digital comics service rather than signing on with ComiXology or Comics Plus, the most popular digital comics platforms. In addition to the Android app, Dark Horse has an iOS app and a web store, and Dark Horse graphic novels are available for Nook and Kobo e-readers.

Being shiny and new, the Android app has a few advantages over the current incarnation of the iOS app, according to director of digital publishing Mark Bernardi. “Comparing Android and the current version of the iOS app, the experience for users of phones and small devices is better on the Android, mainly because of the ability to switch to a list view if they so choose, which makes it easier to read on a small device,” Bernardi said.

Another nuance in the iOS app is found when a customer moves a comic from their collection (stored in the cloud) to the bookshelf (stored on the device), the comic icon disappears from the collection. That doesn’t happen with the Android app (a change that Bernardi said came straight from customer feedback), and will make it easier for users to keep track of which comics they own. Navigating the store section is also a bit easier for Android users because there are persistent links to the “Featured,” “News,” and other sections, while iOS users must tap a menu to get to them.

In-app buying for the Android version works the same as for the iOS version, except that purchases go through Google Wallet rather than the iTunes store. (The beta version of the Android app popped readers out to a browser to do their shopping.) While iOS users can buy comics without setting up a separate Dark Horse account, that option is not available for Android.

The most important difference between the Android and iOS apps, as well as the final and beta versions of the Android app, is speed. “The primary improvements to the app itself, compared to the beta versions, are structural changes in the underlying nature of how we supply the data to people and how it gets there and changes on the server side that make the overall performance—how fast it responds, how fast the catalog loads when you first launch it, how fast books download—quite an improvement,” Bernardi said.

The launch of the Android app coincided with N7 Day, a major promotion by Bioware, the publisher of the Mass Effect game. After Star Wars, Dark Horse’s Mass Effect comics are the most successful titles, Bernardi said, so it was a natural tie-in. Dark Horse launched a 99-cent digital-only comic about the game character Blasto, and the company is offering a chance to win a Nexus 7 tablet to anyone who signs up for the newsletter or confirms their subscription by November 14. “We are extremely pleased with the massive amount of traffic we saw [on November 7] and with the massive amount of newsletter signups,” he said.

“We will be doing other promotions in months to come that will be promoting new titles, and part of our strategy will be tying in the Android app to draw people’s attention to it, particularly with the holidays coming and people getting new devices,” he added.

Bernardi said Android’s open-source software allowed developers more flexibility in designing the app, whereas with the iOS app, “you are more locked in—it’s much more of a challenge to customize things in an app.” The flipside of that is the Android app has to work on many different devices and on different versions of the operating system. “It does seem that [Android users] are slower to upgrade,” he said. “It seems like with Apple, because it’s a closed system, you have a very small number of people out there with old devices that can’t be upgraded, whereas with Android you have a lot of people out there with old devices or tiny phones, so it is a challenge to get the app to work on as many people’s devices as possible.”

“Ideally, we would support every device that exists, so we would never have a disappointed customer,” Bernardi said. “Working from that desire, we then introduce reality and try to figure out at what point should we put the effort in to support these. Even our iOS app does not support any version of iOS earlier than 4.3.”

With the final (for now) version of the Android app launched, the team will now turn to improving speeds on the iOS app. “We anticipate putting out several updates in coming months as we improve our iOS app,” Bernardi said. “The first focus is overall speed, and we will make some changes as to how the information is delivered to the app when it makes a call to the server when someone turns it on. We designed the app when we had 300 or 400 comics in the store, and now we have over 2,000. We have a lot of data, so we need to improve handling so we can improve the customer experience.”