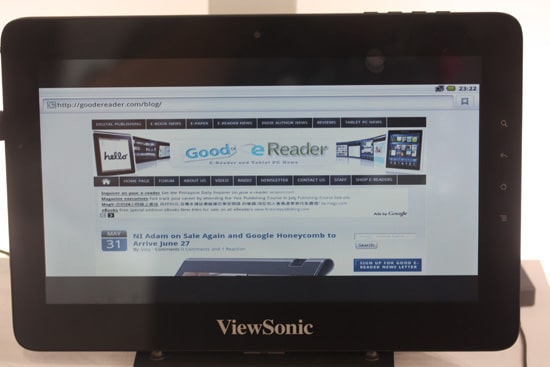 During our escapades in Taiwan for Computex 2011 we found ourselves a very unique tablet in the form of the Viewsonic ViewPad 10 Pro tablet PC. What makes this tablet so very interesting is due to the fact that it runs both Android and Windows 7. This is not your standard dual booting tablet. It has a simple application that within ten seconds goes to Android mode from Windows mode and vice versa.

The Viewsonic ViewPad 10 Pro is a 10.1 inch capactive touchscreen display running a resolution of 1024x 600 pixels. It is running the very latest Intel Oaktrail z670 1.5 GHZ internal processor and has 32 GB of Solid State memory. If this memory is not enough you can further increase it via the Micro SD card up to around 32 GB. It also comes with 2 GB of RAM and has an embedded Intel graphic chipset.

The new Viewsonic tablet has a USB 2.0 and HDMI port! This is solid because you can actually use a USB Flash drive to transfer data to and from your device. You can also use the HDMI port to stream full 1080p video to your television or computer. It also has a 3.5 mm headphone jack and built in microphone, you would mainly use the mic with your built in 2 MP webcam.

The big draw on this device is the fact that it can easily jump between Windows 7 and Android 2.2 at the launch of a small program. This app is called “instant switch” and when you jump to Android you can load in apps via alternative Android Markets such as Slideme or AndAppstore. When you want to jump back into Windows you can click on the Windows icon built into the Android menu and go back.

I really like this device although it only runs Froyo, and I can see this device really catching on if they get the price right for end users and be big for developers. The fact that you don’t physically have to boot the device into the other operating system is huge. I also dig that it is DLNA compliant so you can easily access data right off of your PC or media center.

Finally, Viewsonic is packing in a docking port for this tablet so you can have two additional USB ports, HDMI and an Ethernet port. The docking station was said to be around $80.00 and the ViewPad Pro will be around $300.00 and available July 2011.