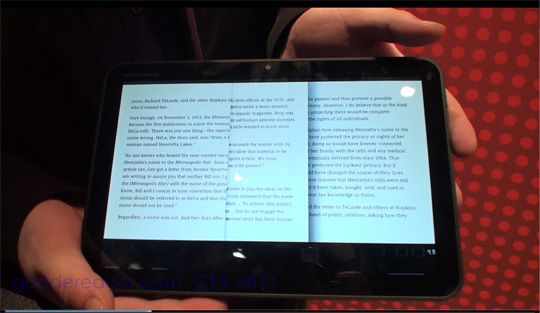 At the CES show in Las Vegas on the tail end of the conference we got our chance to get exclusive hands on with an untethered Motorola Xoom Google Android 3.0 Tablet PC! We show off all of the hardware features and give you a solid overview of the device.

The Motorola Xoom just won “best of show” for their first tablet computer that will soon be released under an exclusive Verizon agreement with upgradable 4G LTE. The Honeycomb user experience improves on Android quintessential favorites such as widgets, multi-tasking, browsing, notifications and customization and features the latest Google Mobile innovations. One of the most exciting features is Google Maps 5.0 with 3D interaction and don’t forget about the built in support for the Google eBook Store and thousands of apps from Android Market.

The Xoom has a dual core processor with each core running at 1 GHz, delivering up to two GHz of processing power, and 10.1-inch widescreen HD display. The unit will allow you to experience HD content right on the device, supports 1080p HD video and HDMI output to display content on larger HD screens, and plays video and other internet content such as Adobe Flash. The Unit features a front-facing 2-megapixel camera for video chats over Wi-Fi or 3G/4G LTE, as well as a rear-facing 5-megapixel camera that captures video in 720p HD. It will allow you to do video conferencing not only via WIFI, but also using the new 4G LTE network, so unlike Apples Facetime, which only works on WIFI, you can video chat anywhere. It delivers console-like gaming performance on its 1280×800 display, and features a built-in gyroscope, barometer, e-compass, accelerometer and adaptive lighting for new types of applications.

The Motorola XOOM device will launch as a 3G/Wi-Fi-enabled device in Q1 2011 with an upgrade to 4G LTE in Q2.