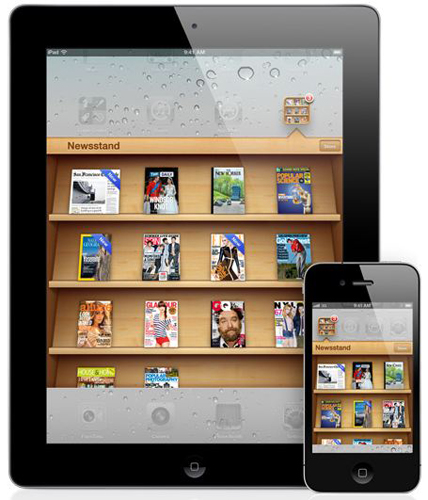 One of the key features of the iOS 5 is the inclusion of the newsstand feature and publishers are already reaping huge profits. Like Conde Nast — publishers of magazines such as Allure, Brides, Glamour, Self, GQ, Golf Digest, The New Yorker, Vanity Fair and Wired — that has reported a huge jump in digital subscriptions, a whooping 268 percent for subscriptions and 142 percent for single issues.

“We couldn’t be happier,” said the company’s EVP Monica Ray. “It’s clear that the focused attention and greater discoverability Newsstand provides our brands has been embraced by the consumer.”

“While we recognise the spike in sales is in part fueled by the attention the launch received, we are very optimistic that we will see a consistently higher level of growth going forward than we did prior to the app’s introduction.”

As for the Newsstand application, it essentially presents a single window for iPad users that allows one to subscribe to or purchase magazines. Newsstand also helps
to keep things organized as there is a separate section for newspaper and magazine subscriptions.

Future Publishing too is all of praise for the Apple newsstand and has also reported “exceptionally high levels of activity.” Similarly, Exact Editions co-founder Adam Hodgkin has stated its sampler apps has been downloaded 14 times more often while sales too has doubled “across the board.”

via bgr, via pocket-lint