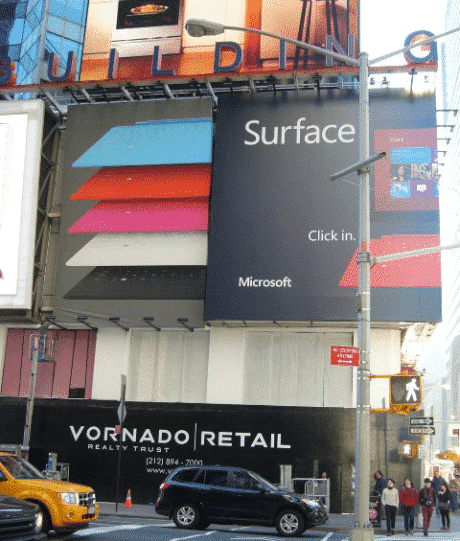 We all know the Microsoft Surface tablets are scheduled for an Oct 26 launch and preparations to introduce the device on to the big stage are already afoot. An advertisement blitzkrieg is a surety and there are reports of that having kicked off already. Microsoft is reported to have set a budget of 400 million to promote the Surface tablets, while a whopping 1.5 to 1.8 billion dollars has been earmarked to make consumers familiar with its new Windows 8 platform.

Peter Han, VP of Microsoft’s US OEM division said, “I can tell you, it’s going to be difficult to tune in to your typical popular TV show or sports program and not see a Windows commercial in the next few months.” The ad seems to bring forth the Surface tablet’s lightweight credentials and its ability to be mixed and matched with a keyboard of any color. The ease with which the keyboard can be attached or released is another area the ad dwelled on.

Interestingly, the Surface ads featuring a lot of dancing first appeared during the US reality show “Dancing with the Stars.” The Surface ads have been developed by a Seattle based ad agency, while Windows 8 promotions has been entrusted with Crispin Porter + Bogusky. An official Surface blog is set to be unveiled soon while the tablet has already been provided with a new Twitter account as @Surface.

Microsoft will initially be launching the ARM based Surface RT devices, while the Intel based Surface Pro devices featuring Windows 8 in all its glory will be arriving around three months later. Also, Microsoft has yet to allow anyone to spend some quality time with the device, so any hands-on or a full review of the device is non-existent. That will change after the Oct 26 launch, which is when we will also know how much the Surface will cost. Microsoft insiders have promised the device will be priced so as to “shock everybody,” while rumors mongers have pegged it at the $199 mark.